Efforts to locate the wreckage of Sir Ernest Shackleton’s ship Endurance have been made possible with Sabertooth hybrid underwater search vehicles supplied by Saab. 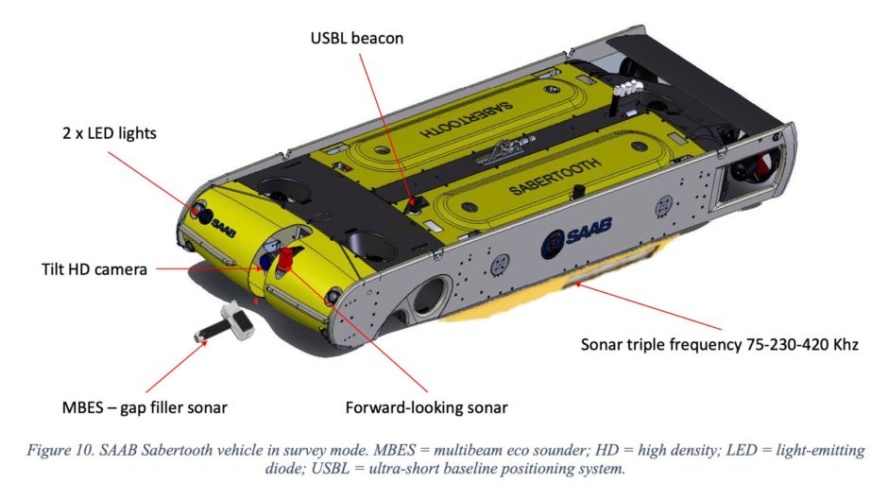 The hybrid vehicles combine the characteristics of a Remote Operating Vehicle (ROV) – always linked to the surface – and an Autonomous Underwater Vehicle (AUV) – capable of operating without a link.

Fitted with high-definition cameras and side-scan imaging capabilities, Sabertooths can search and map huge patches of the ocean floor to depths of up to 4,000m (13,123 feet) sending the data to the surface in real-time.

According to the expedition, Sabertooths can reach sites up to 100 miles away from the ship they are launched from and return with photos, video and survey data. If the sea ice conditions are difficult, it may still be possible for the expedition to survey the site of the wreck.

Nico Vincent, subsea project manager on the Falklands Maritime Heritage Trust’s Endurance22 Expedition, said: “This has been the most complex subsea project ever undertaken, with several world records achieved to ensure the safe detection of Endurance.

“State of the art subsea technologies have been deployed to achieve this successful outcome and I would particularly like to thank the subsea team for all of the engineering support, both on board the ship and throughout the months of planning, design and testing.  All of them showed a huge commitment and resilience, worthy of the finest tradition of polar exploration.”

The Imperial Trans-Antarctic Expedition of 1914-17 was Sir Ernest Shackleton’s attempt to make the first land crossing of Antarctica from the Weddell Sea via the South Pole to the Ross Sea.

The Ross Sea Party landed at Hut Point on Ross Island to set up supply dumps for Shackleton’s crossing party.

Endurance became trapped in pack ice in the Weddell Sea in 1915, leading the 28 crew members to abandon ship.  After settling on Elephant Island, Shackleton and five others made an 800-mile journey in a lifeboat to reach South Georgia. From there, Shackleton mounted a rescue of the men on Elephant Island.

One hundred years after Shackleton’s death, Endurance was found at a depth of 3008m in the Weddell Sea, within the search area defined by the expedition team before its departure from Cape Town, and approximately four miles south of the position originally recorded by Captain Frank Worsley.

The team worked from the South African polar research and logistics vessel, S.A. Agulhas II, under Master, Capt. Knowledge Bengu. The wreck is protected as a Historic Site and Monument under the Antarctic Treaty; the wreck can be surveyed and filmed but will not be touched or disturbed in any way.

Mensun Bound, director of exploration on the expedition, said: “We are overwhelmed by our good fortune in having located and captured images of Endurance.  This is by far the finest wooden shipwreck I have ever seen. It is upright, well proud of the seabed, intact, and in a brilliant state of preservation.  You can even see “Endurance” arced across the stern, directly below the taffrail.  This is a milestone in polar history.”

An account of the Sabretooth’s pre-expedition testing regime can be found here.