Toshiba has developed a scanning spreading resistance microscopy technique that has allowed it to visualise current density in semiconductors down to a resolution of one nanometre.

Toshiba has developed a scanning spreading resistance microscopy (SSRM) technique that has allowed it to visualise current density in semiconductors down to a resolution of one nanometre.

Toshiba will describe its system on April 19th at the International Reliability Physics Symposium (IRPS), the international conference on semiconductor reliability, which is now being held in Phoenix, Arizona.

Scanning spreading resistance microscopy (SSRM) is a preferred technology for two-dimensional profiling of localised resistance on a semiconductor cross-sectional surface, allowing analysis of the distribution of electron carriers and impurities.

The demanding tolerances required for 45nm generation LSI makes it essential to understand electron-carrier density in the carrier channel, and to be able to control doping with 1nm-level precision, as slight differences in electrical characteristics can lead to increased current leakage and risk of short circuiting.

SSRM uses a scanning probe to produce two-dimensional images of carriers in semiconductor device. These images reveal impurity induced resistance variation and allow analysis of electron-flow paths. However, the resolution of SSRM images with conventional available probes has remained at around 5 nm.

Problems with SSRM stem from two sources: degraded imaging accuracy due to the influence of water vapour on the sample: and the difficulty of controlling a sufficiently stable contact between the sample and the probe.

To overcome these factors, Toshiba installed the SSRM in a vacuum environment and refined the positioning of the probe. This allowed the company to optimise performance and achieve a 1nm resolution, the highest yet achieved. 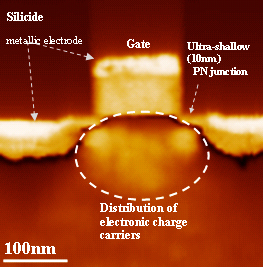 The density of distribution of impurity-charge carriers, previously difficult to detect, can now be analysed in detail. The brighter the image, the higher the conductivity.

Nothing too small to detect