Engineers from Brown and Purdue universities have found that simply changing the surface texture of implants can dramatically change the way cells colonise a wide variety of materials.

Biomedical engineers are constantly coming up with ways to repair the human body, replacing defective and worn out parts with plastic, titanium, and ceramic substitutes – but the body does not always accept such substitutes seamlessly.

Now, engineers from Brown and Purdue universities have found that simply changing the surface texture of implants can dramatically change the way cells colonise a wide variety of materials.

Currently only about 30 percent of small diameter blood vessel grafts (less than 6 mm diameter) last more than five years, and up to 20 percent of stents need to be replaced because the artery walls thicken in and around them in a process known as restenosis. Drug-coated stents were introduced years ago as one way to combat this problem, but concerns have surfaced recently about increased clotting.

Normal healthy blood vessels have a thin lining of specialised cells called the endothelium, surrounded by a thicker layer of smooth muscle cells that make up the arterial wall. The proteins collagen and elastin make up much of this lining and create a texture of fine nanoscale bumps on the inside of the blood vessel. This contrasts strongly with most of the materials used in implants, which have microscale texture, but are nearly smooth at the nanoscale.

When the researchers changed the surface texture of implant materials to better match the natural texture of the endothelium, they found that endothelial cells quickly colonised the foreign surfaces, effectively camouflaging them and preventing smooth muscle cells from overgrowing the implants. Once the endothelial cells form a single, solid layer, they stop piling on and switch to producing the proteins collagen and elastin.

In one experiment, published with Purdue University graduate student Saba Choudhary in the journal Tissue Engineering, Webster and Haberstroh pressed together titanium particles that were less than 1 micron in size to create titanium with nanoscale surface texture. When they compared samples of the nanostructured material to conventional titanium in mixed cell culture, they found that the nanoscale surface features encouraged endothelial cells to colonise the material and spread much faster than smooth muscle cells. Where endothelial cells established themselves, they formed a single thin layer that inhibited overgrowth of the smooth muscle cells that tends to narrow stented arteries.

In another experiment, published in the Journal of Biomedical Materials Research with Purdue graduate student Derick Miller, the team moulded pieces of PLGA, a biodegradable polymer often used for blood vessel grafts, so they came out completely covered with bumps that were 100, 200 or 500 nanometres in diameter. The surface with 200-nanometer features strongly favoured the adsorption and spreading of fibronectin, a protein that helps endothelial cells quickly coat the graft.

Webster and Haberstroh’s next step will be to test such nanostructured implants in live animals. If the same behaviour holds true for materials placed in the body, the rapid growth of endothelial cells would help the implants to integrate quickly into existing blood vessels, provoking less immune response and a longer-lasting repair. 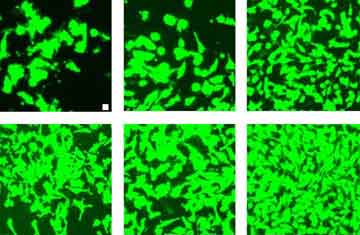