Researchers in China and the US have developed an ultra-thin sound diffuser that is 10 times thinner than diffusers used extensively to reduce echoes and improve sound quality. 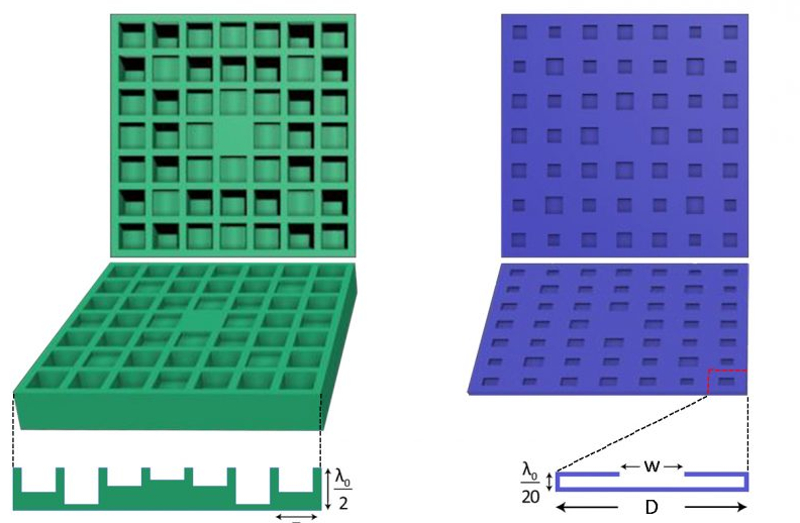 The new design (pictured above right) from North Carolina State University (NC State) and Nanjing University is said to use less material, which would reduce cost and take up less space.

In a typical room with flat walls, sound waves usually bounce off the walls, which creates echoes and overlapping sound waves that result in uneven sound quality.

"Sound diffusers are panels placed on the walls and ceiling of a room to scatter sound waves in many different directions, eliminating echoes and undesirable sound reflections - ultimately improving the quality of the sound," said Yun Jing, an assistant professor of mechanical and aerospace engineering at NC State and corresponding author of a paper on the work.

According to NC State, a typical man's voice can be as low as 85Hz, with a wavelength of 4m. If that's the lowest sound the Schroeder diffuser will have to deal with, the device would need to be roughly 2m thick. By comparison, the new, ultra-thin diffuser design requires a thickness that is five per cent of the sound's wavelength.

"Diffusers are often made out of wood, so our design would use 10 times less wood than the Schroeder diffuser design," Jing said. "That would result in lighter, less expensive diffusers that allow people to make better use of their space."

This reduction in thickness is made possible by the design of the individual cells in the diffuser.

A Schroeder diffuser looks like a panel of evenly spaced squares, which are identical in length and width but vary in depth.

The ultra-thin diffuser also consists of evenly spaced squares, but the squares appear to be of different sizes because each square is an aperture that opens into a thin, underlying chamber. These chambers all have identical dimensions, but the size of the apertures varies, accomplishing the same sound diffusion as the much larger Schroeder diffusers.

"We've built fully functional prototypes using a 3D printer, and it works," Jing said in a statement. "The design should work just as well using wood.”