A University of Washington assistant professor of aeronautics and astronautics has built three robot fish that can communicate with one another underwater.

In the future, such ocean-going robots could co-operatively track moving targets underwater, such as groups of whales or spreading plumes of pollution.

The Robofish, as they are known, are roughly the size of a 10-pound salmon, and use fins rather than propellers to move in the water. The fins make them potentially more manoeuverable and are thought to create lower drag than propeller-driven vehicles.

In the design of the Robofish, the researchers faced a major challenge; they needed to develop an on-board system that would allow the fish to transmit information through dense water.

'When you're underwater you run into problems with not being able to send a lot of data,' said Kristi Morgansen, a University of Washington assistant professor of aeronautics and astronautics, and the builder of the robot fish. 'State of the art is 80 bytes per second'.

What's more, the energy required to send the information over long distances is prohibitive because the robots have limited battery power. Worse, signals can become garbled when they reflect off the surface or off of any obstacles.

To solve the problem, messages were sent between the robots using low-frequency sonar pulses, or pressure waves. Although only about half the information was received successfully, because of the way the Robofish were programmed, they were still able to accomplish their tasks. 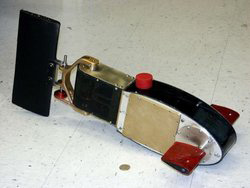 A fin-propelled Robofish designed at the University of Washington. A penny in front of the robot gives a sense of its size

Now, the researchers are asking the Robofish to perform a task similar to one that they might face in the ocean. The Robofish pack's first assignment, beginning this summer, will be to trail a remote-controlled toy shark.