Researchers in the US have developed a robotic bat with soft, articulated wings that can mimic the key flight mechanisms of biological bats.

Bat Bot (B2), developed by a team led by researchers from the University of Illinois at Urbana-Champaign and Caltech, could have applications where flapping-winged robots are required to operate in tight quarters with humans, and beyond where humans can safely go.

"Our work demonstrates one of the most advanced designs to date of a self-contained flapping-winged aerial robot with bat morphology that is able to perform autonomous flight," said Alireza Ramezani, a postdoctoral researcher at the University of Illinois and first author of a paper describing the breakthrough in Science Robotics. "It weighs only 93g, with dynamic wing articulations and wing conformations similar to those of biological bats."

Ramezani developed the prototype with Caltech’s Soon-Jo Chung and Seth Hutchinson at Illinois.

"Our work introduces a design scheme to mimic the key flight mechanisms of biological bats," said Chung. "There is no well-established methodology for reverse engineering the sophisticated locomotion of bats."

The mechanism of a bat’s flight involves over 40 types of joints that interlock the bones and muscles to one another. This creates a musculoskeletal system that can change shape and is capable of movement in multiple, independent directions.

"The B2 possesses a number of practical advantages over other aerial robots, such as quadrotors," said Chung. "Bats do have more 40 active and passive joints; we reduced those numbers to 9 [5 active and 4 passive] joints in the B2 robot. The compliant wings of a bat-like flapping robot flapping at lower frequencies [7-10Hz versus 100-300Hz of quadrotors] are inherently safe: because their wings comprise primarily flexible materials and are able to collide with one another, or with obstacles in their environment, with little or no damage."

The B2 is said to utilise a morphing skeleton array and a silicone-based membrane skin that enables the robot to change its articulated structure in mid-air without losing an effective and smooth aerodynamic surface.

"Our flight control results are the first demonstration of using asymmetric wing folding of the main flexible wings to control the heading of the aerial robot," Ramezani said. "Its morphing property cannot be realised with conventional fabrics that are primarily used in flapping wing research. Non-stretchable materials resist the forelimb and leg movements in B2. As a result, we covered the skeleton of our robot with a custom-made, ultra-thin [56 micron], silicone-based membrane that is designed to match the elastic properties of biological bats' membranes." 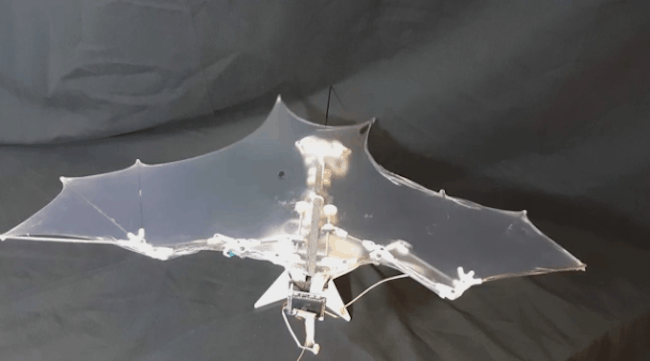 Bat-inspired aerial robots are claimed to bring improvements in energy efficiency over current aerial robots. According to UI Urbana-Champaign, this is partly due to their articulated soft wing architecture, and the fact that wing flexibility amplifies the motion of the robot's actuators.

"When a bat flaps its wings, it's like a rubber sheet," said Hutchinson, who is a professor of electrical and computer engineering at Illinois. "It fills up with air and deforms. And then, at the end of its down-stroke motion, the wing pushes the air out when it springs back into place. So you get this big amplification of power that comes just from the fact you are using flexible membranes inside the wing itself." 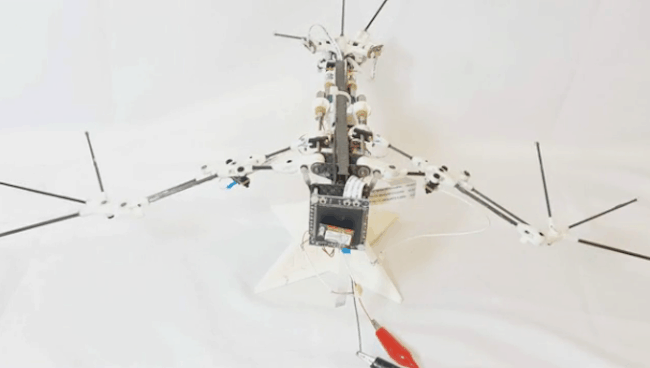 The study - "A Biomimetic Robotic Platform to Study Flight Specializations of Bats" - can be found online at: http://robotics.sciencemag.org/content/2/3/eaal2505.