Scientists and engineers at Tufts University in Massachusetts have used a wearable bioreactor to promote limb regrowth in a frog. 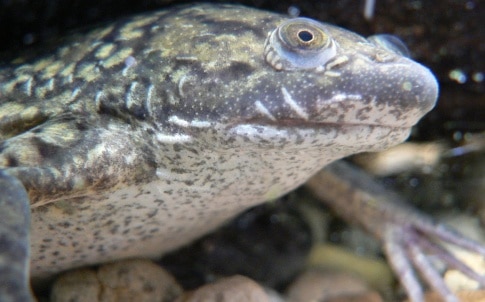 While many frogs and lizards can naturally regenerate limbs, the adult African clawed frog at the centre of this research cannot. However, using a wearable device that delivered the hormone progesterone over a 24 hour period led to the partial regrowth of the frog’s hind leg over the ensuing nine months. It is hoped that the work, which appears in Cell Reports, could form the basis for future research into human limb regrowth.

“We looked at progesterone because it showed promise for promoting nerve repair and regeneration,” said Celia Herrera-Rincon, a post-doctoral fellow at Tufts and lead author of the study. “It also modulates the immune response to promote healing, and triggers the re-growth of blood vessels and bone.

“Progesterone can also regulate the bioelectric state of cells, caused by cells passing ions across their outer membranes, which is known to drive regeneration and body pattern formation.”

The wearable bioreactor contains a silk protein-based hydrogel that is applied directly to the wound and is capable of delivering small molecule compounds to the site. According to biology Professor Michael Levin, director of the Allen Discovery Center at Tufts, future experiments will explore additional factors that can enhance or improve upon the effects of progesterone.

“We’ll be using the bioreactor model as a new platform for finding ‘master regulator’ control points, activated by drugs which, after a very brief treatment, trigger a long programme of tissue growth and remodelling - as well as other factors that support the entire process of regeneration,” Levin said.

“The fact that the model applies treatments locally, which can also be varied over time and location on the wound, makes this a powerful tool for discovering regeneration therapeutics.”

This research was supported by the Allen Discovery Centre through The Paul G Allen Frontiers Group, the National Institutes of Health and the W M Keck Foundation.

MORE NEWS FROM THE ENGINEER