Noise, Vibration and Harshness (NVH) engineering plays a very important part in modern car design. OEMs often allocate large amounts of resource towards meticulously researching, analysing and developing the NVH characteristics of their new products to ensure that they have the appropriate ‘brand sound’.

Today, a number of NVH engineering specialists around the world including MIRA use NVH simulators - highly complex and accurate engineering tools - to accurately enhance, refine or eradicate specific sounds in vehicles. Since their introduction in the last decade, these specialist devices have enabled engineers to test the effects of engineering changes such as new engine mounts, suspension mounts or exhaust systems ‘on the fly’ in a virtual environment, which in turn has rapidly sped up the NVH development process for vehicle manufacturers.

From a distance, the virtual environment in which these complicated NVH engineering tweaks are evaluated resembles a computer game – with the ‘driver’ sat in front of a computer screen using a steering wheel and pedals to control the car. These high-tech pieces of engineering equipment look like mainstream entertainment systems to the untrained eye and it could be said that computer games have acted as a source of inspiration for the development of modern day NVH simulators. 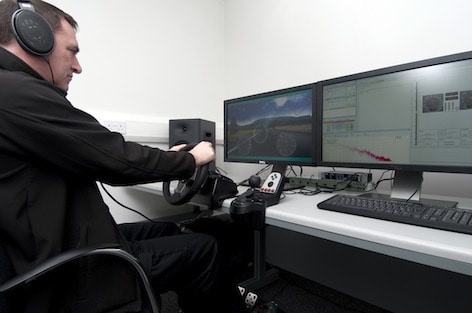 MIRA has been involved in the acquisition of sound data for computer games for a number of years. In 1999, the NVH team at MIRA was approached by Sega and the UK based computer games developer Bizarre Creations, who were putting together ‘Metropolis Street Racer’ for the Sega Dreamcast. The lead sound engineer on the project knew that their rivals Sony had acquired real car sounds in order to obtain the ‘realistic’ sounds that were featured in the widely acclaimed Playstation driving game Gran Turismo, something which was totally ground breaking at the time. Although gamers praised the ‘realism’ of the game, Sony had obtained the car sounds by recording basic engine and exhaust sounds from a static vehicle. From an NVH engineering point of view this was not the right approach, as engines need to be put under load in order for the vehicle to produce a realistic sound.

In order to improve the sounds of the cars in their game, Sega enlisted the help of our NVH engineers to make them sound more realistic. In order to do this a selection of vehicles were placed on a semi-anechoic chassis dynamometer and exhaust, interior and engine noises were recorded. 6 vehicles were tested overall for Metropolis Street Racer including the Mercedes SLK and a Vauxhall VX220. These were measured at a range of constant engine speeds at full, part and closed throttle, something that is only possible in a chassis dynamometer. The recordings made were then blended together to produce realistic sound in the game within the relatively limited storage space for sound samples allowed by the games console hardware available at the time. 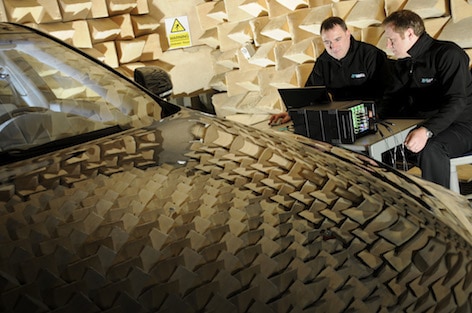 This approach to recording vehicle sounds for a computer game was revolutionary. Since then MIRA has worked with a number of other developers to help them achieve realistic sounds in their driving games, including the highly acclaimed Project Gotham series, Colin McRae Rally (in which over 30 cars tested) and TOCA Touring Cars.

Over the years NVH engineers at MIRA have stuck to the same tried and tested process, whilst employing the use of the very latest NVH test equipment in order to obtain sounds for vehicles in a wide selection of computer games including a Jaguar D-Type, Ferrari Dino, Lagonda V12, Metro 6R4 and Colin McRae’s Focus WRC.

These days, computing power has become so advanced that the actual sound a car makes can be reproduced in real time in a virtual environment using the NVH simulator. This includes engine noise (speed, load and gear dependent), road noise (including individual contributions from each tyre) and wind noise all being faithfully reproduced at any combination of speed, road surface and throttle opening.

Whilst NVH engineers have traditionally had to rely on large amounts of real life testing, either on a track or in test facilities, the power and capability of NVH simulators has meant that only a small amount of real world testing is now required before initial investigation of issues can be transferred to the simulator. The sound of the vehicle can be manipulated in the virtual environment to achieve a target ‘brand sound’ or investigate the effect of fitting new exhausts, suspension systems or even a different engine to the sound of the car. This is a clear benefit to OEMs who are under ever increasing pressure to develop new cars for market with limited numbers of engineering cars available for testing. 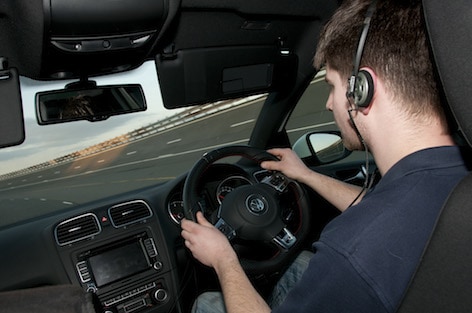 Established techniques such as time-domain Transfer Path Analysis (TPA) can be used to separate out the contributions to interior noise from each engine mount, exhaust mount, suspension mount, etc. when incorporated into the NVH simulator, the virtual car can be ‘driven’ and each of the contributions evaluated separately or in groups.

This then leads naturally on to the capability to merge Computer Aided Engineering (CAE) simulations into the simulator model. For instance, predictions can be made of the transfer of structure-borne road noise from the tyre to the interior of the vehicle. This CAE simulation can then be modified (bush characteristics, suspension arm modes, etc.) and the modified prediction incorporated into the NVH simulator. This allows engineers to ‘drive’ the vehicle, assessing the effects of vehicle modifications in real time. This is especially useful when you consider that traditional NVH development often involves engineers painstakingly finding ways to improve one NVH characteristic of a vehicle and building prototype components to evaluate the change only to find that this has adversely affected another characteristic in the process.

By harnessing the power of modern simulator technologies in NVH engineering, OEMs around the world are continuing to benefit from technological advances to aid them in assessing a vehicle early in a development program.

Shaping the sound of future vehicles

Sound in the round