Rules of engagement: how to inspire the next generation of engineers

Shane McCracken, founder of one the UK's most innovative efforts to inspire school students about engineering, offers some pointers on how industry can more effectively engage with younger generations

First the good news. School students have a positive view of science and engineering. About 70 per cent say they learn interesting things in school and that scientists make a difference in the world. 71 per cent of the students about to take part in our event "I’m an Engineer, Get me out of here" think that Engineers have an interesting job. Sorted. What’s the problem?

The problem is that according to ASPIRES project from KCL less than 20 per cent of those students who like science aspire to be a scientist. They don’t think that science is something for them. Of our students, only 10 per cent were confident they would like to work as an engineer.

The other problem is that this interest is not evenly spread. School students are not one homogenous group. Girls are different to boys. Only 5 per cent of girls were confident they would like to work as an engineer. There is a difference in the way they describe engineering. Boys and girls both use words like “builds”, “fixes” and “machines”. However, boys are much more likely to also use “design” and “structures”. Girls are not seeing the creative design aspect of engineering.

When the Institute of Physics analysed the difference in the questions that girls and boys asked STEM professionals they found girls were more likely than boys to ask about job satisfaction, goals, achievements and motivations. In short, they were interested in the scientists and engineers as people not just about the science and engineering that they did.

It’s not just a gender difference. The IMechE published a report called Five Tribes: Personalising Engineering Education where they identified STEM Devotees, Social Artists, Enthused Unfocused, Individualists and Less Engaged tribes. The Enthused Unfocused lack the confidence to succeed and Social Artists have little affinity with STEM, but both groups would be valuable pools of talent for engineering. The Individualists are innovators and entrepreneurs who consider creativity in engineering, but don’t see it for them. 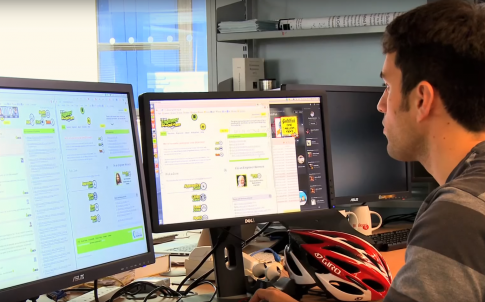 As expected the STEM Devotees are the low-hanging fruit that many school outreach projects target. Big headline events such as the Big Bang Fair, F1 Challenge, Bloodhound SSC have great appeal but they are mostly appealing to the STEM Devotees who already form the majority of the engineering workforce. Many existing outreach projects work with STEM Clubs or are self-selecting opt-in activities that often miss the pupils that need them the most.

Sometimes the perception that students have is stacked against us

The people you know are a big influence on career choices for young people. If your family has engineers or knows engineers you are more likely to consider engineering as an option. To attract a more diverse workforce, engineering will need to find a way of getting a more diverse group of students to meet a more diverse range of engineers. Those meetings need to occur in a meaningful situation where conversations about being an engineer can take centre stage as opposed to situations where we try to “wow” students with impressive machinery. Those engineers will need to engage with the other tribes: the Social Artists, Enthused Unfocused students and show them that an engineering career is creative, social and deserving of respect.

It’s not the easiest of tasks. Sometimes the perception that students have is stacked against us. In our 'I’m an Engineer' project, time and time again we find girls asking just how bad it is to be a woman in an engineering firm. “Do you feel pressured at work since you’re a woman?”;” Do you think there is a glass ceiling for women in the engineering business?”; ”In engineering do women get to do the same jobs as men?”; ”Have you worked with any women engineers?”: questions like these come up every time we run I’m an Engineer.

The gap between perception and reality can be hard to bridge in some cases. And sometimes, to be frank, engineers need a little practice at communicating the nuances of their job and lives.

Fortunately, there are plenty of ways to engage with students that suit all types of engineers. Some will like the performance aspects of visiting a school and giving a presentation. Others will prefer a structured project with a STEM club where the students do something practical. For some a student-led activity online, like I’m an Engineer, pushes the right buttons.

In the coming months, through a series of articles here in The Engineer -  engineers and teachers will be sharing their experiences of students' engineering perceptions and how they have tried to reach out and engage with kids who don’t normally get the chance to have a conversation with an engineer about themselves.

Shane McCracken runs I'm an Engineer, Get me out of here, an online STEM engagement project that connects school students and engineers. Free to UK and Ireland schools the non-profit activity is funded by the Royal Academy of Engineering and Wellcome Trust for the 2017/18 school year.

Creativity is key to attracting the next generation of engineers

Rules of engagement: How MetaboLight is illuminating young lives