Author Gareth L Powell considers how today’s smallsats could pave the way for a future generation of self-configuring modular spacecraft.

Small satellites are big business. According to the UK’s Satellite Applications Catapult, more than 2,000 “smallsats” are expected to take to the skies in 2022.

The official definition of a small satellite is a spacecraft with a mass of less than 180 kilograms and dimensions no larger than a standard American refrigerator-freezer. Lighter and easier to manufacture than bigger spacecraft, smallsats are better suited to mass launch programs and constellations and are often used as testbeds for new technologies, or for missions that don’t justify the expense of a larger satellite.

A variety of smallsat known as the CubeSat is a modular unit than can be used in conjunction with other units to provide a configurable and scalable platform for a variety of mission profiles.

Initially employed in low Earth orbit for remote sensing or communication applications, small spacecraft like these could one day be used to support the assembly and repair of larger spacecraft; explore planetary environments, and perform scientific observation of asteroids and comets.

As a science fiction author, I am very excited by the idea of a swarm of independent spacecraft that can combine at will to form larger structures. Allow me to project that concept forward a few decades and describe the following scene.

Imagine a rocket on the pad at Cape Canaveral. Atop the booster, an astronaut sits in a capsule that only yesterday was a pile of smaller units in a warehouse. Now, they have configured themselves into a crew vehicle. Propelled into orbit by the reusable booster, they join with other cubesats already in orbit and rearrange themselves to form the interplanetary transfer vehicle that will carry the astronaut to the Moon. Meanwhile, other clusters of identical cubes are in use as space stations, refuelling depots, communication relays, and even surface rovers.

Instead of developing an expensive range of specialised vehicles, future space explorers could use modularity to provide them with the tools to meet any mission profile.

We can also imagine combining this concept with the ‘utility fog’ technology I described in a previous column, in which clouds of tiny programmable nano-robots make up networks of interconnected, micron-sized particles that can be configured to any pre-determined shape and be used to construct larger machines.

In that case, explorers on Mars wouldn’t worry about having a return vehicle for the journey home. When they needed it, their habitat would simply break itself down and repurpose its components.

Cheap and standardised, these advanced cubesats would be cheap and easy to produce in huge numbers. All they would need for each mission would be instructions or templates telling them how to configure themselves. And when the mission was over, they would simply break apart into individual units again, ready to be programmed into the next required shape.

In this future, the constellations currently being assembled by SpaceX and OneWeb would seem as nothing to the clouds of tiny satellites crowding low Earth orbit. If they become sufficiently inexpensive, it’s feasible every phone or internet user could have their own dedicated cubesat, able to communicate via the network of its brethren with any other user. Rather than relying on ground-based servers, our webs of communication would reside in space—safe from interference, censorship or sabotage, but maybe more vulnerable to solar flares and other hazards.

And while all this sounds exciting, it will also bring hazards we maybe haven’t foreseen. NASA estimates that there are currently around 6,500 satellites orbiting the Earth, almost half of which are inactive or obsolete. Add to this the 27,000 pieces of orbital debris or ‘space junk’ currently being tracked by the US Department of Defence’s Space Surveillance Network, and you start to realise that low Earth orbit is a seriously congested place. And when you consider that much of this material is moving at around 17,500 miles per hour, the dangers of collision become apparent.

A collision between two satellites, or between a satellite and a piece of random space junk, might cause more problems than simply damaging or destroying the items involved. Each collision would provide more debris, orbiting the Earth in a dispersing cloud like a shotgun blast. And if collisions become more frequent, the amount of debris will grow, causing further collisions in an exponential cascade, until all we’re left with is a planetary ring of dust-sized wreckage of no use to anyone. 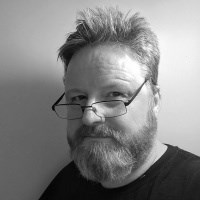 Gareth L. Powell is an award-winning science fiction novelist. His latest novel Stars and Bones is now available from Titan Books, and you can find him on Twitter @garethlpowell

The final frontier is participation