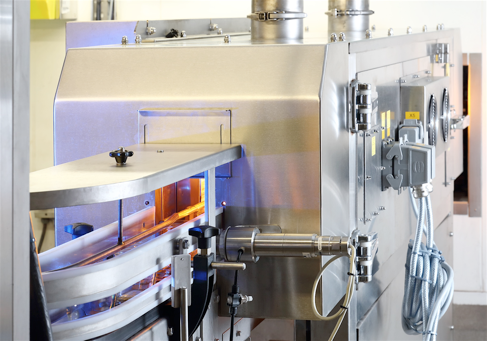 A purpose-built carbon infrared oven has been instrumental in allowing Duerr’s of Manchester to change from a hot water rinse system to a cold air rinse system at their Wythenshawe jam-making site. As a result, water-usage and water-heating bills have been significantly reduced and more effective control has been established over the total jar heating and rinsing process.

Before filling, jars need to be rinsed and this was previously carried out by a hot water rinsing process. Heat was necessary to prevent thermal shock and possible breakage of the glass, as jars are stored at temperatures as low as -5°C and jam is at temperatures up to 97°C during filling. The glass manufacturers recommends a maximum temperature difference of 84°C. With the hot water rinse, the jars were pre-heated by the hot water. However, the hot water rinsing plant, which had been in use for many years, was becoming increasingly inefficient, resulting in high water usages and costs. In addition, production was slowed down when there was change-over in jar sizes.

Consequently, it was decided to replace the aging water-rinsing plant with a modern air-rinsing plant, bearing in mind that this would require a separate jar-heating system.  After rejecting steam heating for this task, as it would have involved further water consumption, it was decided to investigate the potential of infra-red heating and David Costello, the projects manager at Duerr’s, contacted Heraeus Noblelight to ask the specialist infra-red company to carry out tests at their Neston Applications Centre. These proved so successful that a 50.4kW carbon medium wave oven was eventually installed at the Wythenshawe site.

This has been designed to fit over an existing conveyor belt and comprises two 25.2kW zones, each fitted with three carbon medium wave emitters, which offer the highest efficiency for heating glass. The emitters can be switched on according to the height of the jars being heated, with two emitters per zone switched on for jars up to 100mm high and three emitters per zone for jars higher than 100mm. An optical pyrometer measures the temperature of the jars as they leave the oven this temperature is displayed on the control panel. The oven can be operated manually or automatically. In manual operation, the operator can manually adjust the delivered power of the oven via a potentiometer to achieve the required temperature. In automatic operation, the measured exit temperature of the bottles is fed back to a PID controller and the emitters are then automatically regulated to maintain the set temperature. In the event of a line stoppage, the emitters are automatically switched to a stand-by level at an on/off speed of response of around one second.

Duerr’s David Costello says: “We have now saved over £8,000 Per annum on water consumption costs. In addition we have a rinsing and heating plant which is much more flexible, much easier to control and offers a better working environment to the workforce.”

Electrical sockets and switches are dried with infrared system