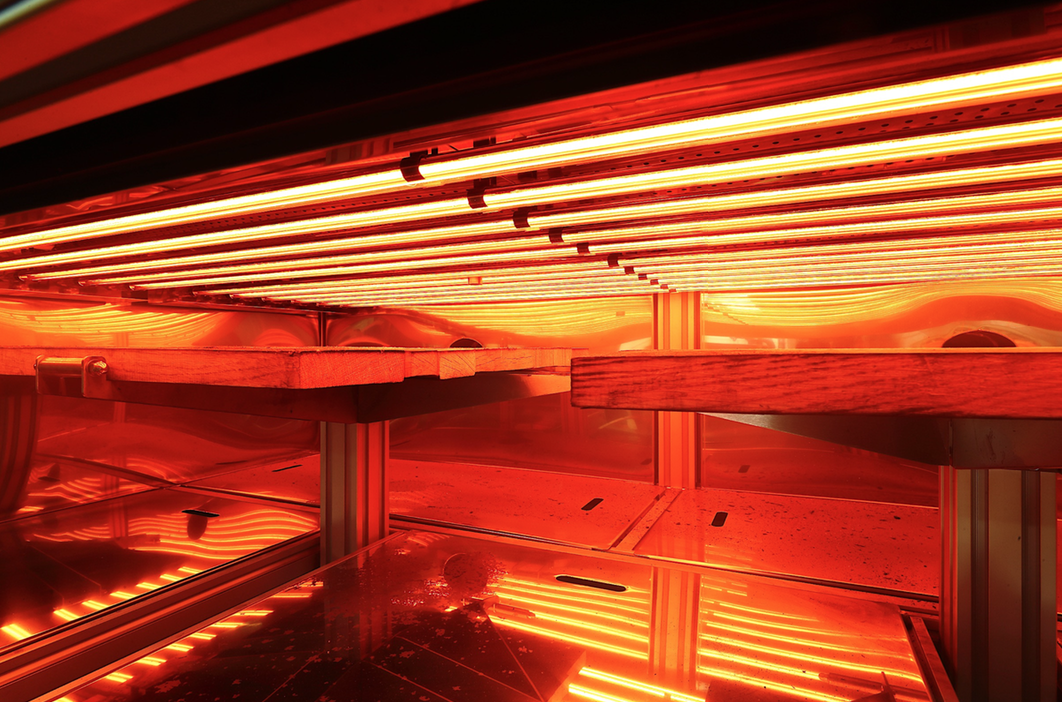 A purpose-built infra-red heating system from Heraeus Noblelight is being used by Edrington, the premium spirits company, to assist in regenerating casks. This is achieved by replacing the existing ends of refill casks with new toasted ends toasted in the Hereaus Infra-red toaster.

Edrington is  an international spirits company whose brands include The Macallan, Highland Park and The Glenrothes single malt Scotch whiskies, The Famous Grouse blended Scotch and Brugal Rum.

In order to construct a cask the staves must be bent into shape which, traditionally, is done by arranging them around a fire, the heat from which not only helps to shape the cask but chars/toasts the inside of the stave. Not only does the charring/toasting break down the structure of the oak, allowing easier penetration by the spirit, it also creates flavour.

By understanding the way in which different temperature parameters help to create specific flavours, distillers and winemakers can now fine-tune the charring/toasting process, asking for light, medium, medium-plus, and heavy chard/toasts. It is not simply the length of time taken, but the intensity of the heat and the amount of time the peak temperature is maintained.

Charring does a number of things. It helps to further break down the structure of the oak allowing easier, and deeper, penetration by the spirit, and a more intense interaction with the flavours produced through lignin degradation. The cracks produced in the surface also increase the surface area available to the spirit.

The charcoal layer which has been created also acts as a filtration system, helping to remove unwanted flavours, such as sulphur, from the new spirit. Charring also increases the levels of vanillin, cacao-like flavours and spiciness. On the other hand, the heavier the char the lower the levels of tannin and oak lactones.

The impact of the flavours created by toasting (and charring) will diminish each time the cask is filled with new make spirit. This is one of the reasons for regenerating casks.

Traditionally, this has been done by using a naked flame to char both the body of the cask and the ends. However, this can produce an inconsistent finish and, in today’s world, has Health and Safety implications. As a result, Edrington turned to infra-red specialists, Heraeus Noblelight, to investigate the possibility of a more efficient alternative to the traditional process.

Successful extensive trials at Heraeus’s Neston Applications Centre established that infra-red would satisfy the end toasting requirement and consequently, an 80.4kW carbon medium wave oven was installed at Edrington’s Muirhall Cooperage site.  The heating zone of the oven can accommodate two cask ends and is fitted with an optical pyrometer. The pyrometer measures the temperature of one of the cask ends and its output automatically regulates the power to the twelve 6.7W IR emitters, which, initially, heat both cask ends and then hold them at temperature. A typical cycle time is ten minutes but this can be adjusted at the control panel.  The cask ends are loaded into the oven, two at a time, by means of a sliding drawer. The heating cycle is started automatically, or manually from the control panel, once the drawer has been closed. If a drawer is opened during the cycle, the heating is automatically switched off and a flashing red light indicates that the toasting is incomplete.

In operation, it has been found that full oven power is required for only two minutes to bring the cask ends to the required temperature, which is then held for the remaining eight minutes at just 50% power. This equates to running costs of around 40 pence per cask end.

Richard Russell, Cooperage Manager at Edrington, is very pleased with the new installation. He comments, “Quality is paramount for Edrington and the regeneration of our refill casks is an important element in this. The infra-red system now gives us a consistent quality and cask end treatment has now become a controllable operation, which is easy to use.”

Heraeus specialises in the production and application of high quality energy sources covering the electro-magnetic spectrum from ultraviolet to infra-red. It has over 40 years experience in infra-red technology and offers the expertise, products and systems to provide efficient and effective solutions to drying, heating and curing problems throughout industry.