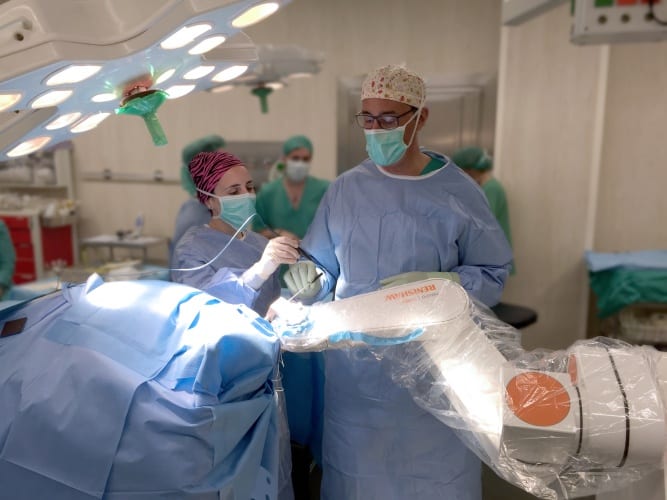 Renishaw has reported the successful installation of its Neuromate stereotactic robot and surgical planning station at Sant Joan de Déu Barcelona Children’s Hospital. Since the installation in April 2016, the system has been used successfully for both stereoelectroencephalography (SEEG) for epilepsy and deep brain stimulation (DBS) for dystonia procedures. The centre also plans to use the system for endoscopy procedures in the near future.

Dr Jordi Rumià (Head of Functional and Stereotactic Neurosurgery at Hospital Clinic), together with Dr Santiago Candela Cantó (Paediatric Neurosurgeon at Sant Joan de Déu), have used the Neuromate system for multiple SEEG procedures. They report good results in terms of accuracy and patient outcome and are feeling positive and motivated about the use of the system for the future.

Dr Candela said: “We are really satisfied with the results of the Neuromate. We have performed four surgeries, including one implantation of bilateral electrodes in GPi for dystonia in an eight-year-old child, and three SEEG procedures, with an average of nine electrodes each, in two children nine years old and a 19 year old. In all four cases the electrodes were placed exactly where we had planned.”

“We are very proud of our results because we have good clinical benefit”, added Dr Candela. “The dystonia patient doesn't need a wheelchair anymore and is able to play football. In the patients with epilepsy, we have been able to localise the epileptogenic origin. We have already planned the resective surgery in two of them.”

Renishaw takes great pride in the service and support offered, which is reflected by Dr Candela: “After the training with Renishaw’s team in our hospital and their support during the first surgeries, we feel confident with the software and the robot.”

Victor Escobar, managing director of Renishaw Iberica, said: “Working with the team at the Sant Joan de Déu Barcelona Children’s Hospital is an amazing and highly rewarding experience. They are not only highly professional but also extremely conscious of how different a child is as a patient. They made it very clear how important this was for them since we started talking about integrating the Neuromate robot in their workflow. Now, when the team reports any improvements in a child’s life, it makes me feel proud of the work they are doing.”