HS Marston Aerospace Ltd is renowned for its heat exchangers in the commercial and military market. As part of Collins Aerospace, a unit of Raytheon Technology, the company manufactures a wide array of heat exchangers including plate and fin, laminated, shell and tube, as well as cold walls, cold plates and cooling panels.

Cleaning of heat exchanger components is a quality-critical process step. “The complex geometries make it difficult to get these parts clean and dry which is necessary for the subsequent brazing. Here, even very tiny residue can cause failures which can lead to leakage”, explained Andy Lees, Site Lead, Operations. Cleaning is also key to protecting the furnace since residual oils left on parts will be burnt in the chamber and this could cause long term damage.

Today, at its site in Wolverhampton, UK, HS Marston runs three closed machines on the modified alcohol grade DOWCLENE™* 1601 for the cleaning of different component parts. The oldest machine was installed in 2011. Since then – thanks to the high stability of DOWCLENE™* 1601 – not one single bath exchange has taken place. Due to the processing steps involved such as brazing, assembling and machining, the parts typically go through 3 rounds of cleaning during the entire manufacturing process.

While HS Marston now has a reliable fleet to deliver efficient and consistent cleaning results, they have been through some twists and turns in their cleaning journey to get to where they are today.

HS Marston is a specialist in the manufacturing of different heat exchangers.

Back in the 90s, HS Marston relied on Trichloroethylene (TRI) in an open top degreaser for component cleaning. Whilst the solvent had always delivered satisfying results with low maintenance requirements, concerns related to environment, health and safety (EH&S) necessitated the search for an alternative.

For a brief period in 2003, HS Marston experimented with water-based cleaning. Due to staining on parts surfaces and insufficient drying, it became quickly apparent that this would not make for a feasible long-term solution.

Later on, it adopted n-propyl bromide (nPB) in a closed cleaning machine. Stability was proving to be a major issue, with roughly 15% of the parts cleaned needing to be scrapped. The solvent also corroded the seals in the machine, posing a massive EH&S issue (As of 2020 the substance is no longer legally available to use for component cleaning due to REACH).

In 2009, HS Marston turned to hydrofluorocarbon (HFC) used in an open top degreaser. Although the fluorinated solvent did a reasonably good job in cleaning, there were two major problems. First, it was very expensive to run. Solvent spend averaged £50-60,000 per month because of the high solvent consumption. Secondly, the chlorinated molecule contained in its formula went against the parent company’s plan to prohibit chlorine on their facilities.

It was only when HS Marston discovered DOWCLENE™* 1601 in 2011 that they could finally put to rest their decade-long search. Based on modified alcohols, DOWCLENE™* 1601 is a distillable solvent and has a wide range of approvals in the aerospace industry including Rolls-Royce and SAFRAN.

Thanks to its lipophilic and hydrophilic properties, DOWCLENE™* 1601 can remove oils and greases just as effectively as certain polar contaminations like cooling emulsions or solids such as particles and abrasives. The solvent is also characterized by low toxicity and good biodegradability.

“We couldn’t believe how clean the products came out, and how the quality had improved as such. It was really a revelation,” said Lees. The modified alcohol solvent was quickly adopted and used in combination with the company’s first vacuum closed cleaning machine.

Quality or sustainability? It doesn’t have to be one or the other

Business had continued to thrive and in 2016, HS Marston found itself contemplating the acquisition of another cleaning machine. As satisfied as it was with DOWCLENE™* 1601, being a responsible and diligent business, HS Marston nevertheless undertook a series of intensive trials with different cleaning solutions.

“We wanted to convince ourselves again. We were happy with what we’ve got, but we still did lots of trials with various machine manufacturers on different cleaning media. We included trials with DOWCLENE™* 1601 and perchloroethylene too. Part of us thought perhaps we could still convince our parent company to let us use chlorinated solvent. During the trials, we expected perchloroethylene to perform better than DOWCLENE™*, but actually there was no difference for our specific application,” Lees recalled.

For the evaluation, quality was a major weighting factor because the parts needed to be cleaned to the highest standard to facilitate brazing in the next stage. The rigorous technical demand must also comply with the corporate’s sustainability protocol which sought to get rid of any chlorinated element.

While the flammability of modified alcohols had raised some internal concern, the company also recognized that the small risk could be adequately countered by all the proficient safety features modern vacuum cleaning equipment provided. The final decision fell back on DOWCLENE™* 1601, to be run on a second new machine, since it was the only available option which could truly satisfy the diverging interests.

COMPLEASE™ makes you feel at ease with the process

When HS Marston first adopted DOWCLENE™* 1601, it already took advantage of COMPLEASE™, a customized chemical leasing package offered by SAFECHEM. This offering covers not only the supply of fresh solvent and take back of used solvent in the SAFE-TAINER™ System, SAFECHEM’s proprietary solvent risk management measure. It also includes test kits and stabilizers, lab services, solvent trainings as well as technical service and consultancy.

The scope of the contract has been further expanded to cover the additional solvent consumption of DOWCLENE™* 1601 and associated services when the company added two more machines to its fleet.

“When we first signed on to COMPLEASE™, it was all about having peace of mind. We had a new machine running on a new solvent. We didn’t want to have to worry about anything. Of course, we also have personnel changes over the years. So we can take up the solvent trainings to train our people from the ground up. Quite simply, COMPLEASE™ allows you to feel at ease with the process and not have to worry about needing to order anything,“ Lees noted. 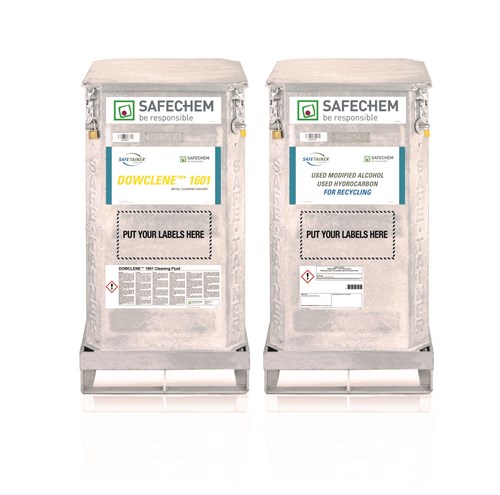 The SAFE-TAINER™ System ensures the safe and sustainable transport, storage and handling of solvents.

The proof of the pudding – real savings

For HS Marston, the benefits conferred by its now well-established cleaning process goes far beyond quality cleaning. The company has also been able to make significant financing savings while preserving the environment. According to HS Marston’s own analysis, the efficiency of its parts cleaning helps cut greenhouse gas emissions by around 225 tonnes of CO2 per year – equivalent to the annual emissions from around 20 cars, or the energy usage of 10 homes per year. Solvent spend is down by at least 50%, while cycle times are halved. Rejection rate of parts is only 1% – and not cleaning related.

Addressing the market perception that water cleaning might be a greener option, Lees remarked: “When you look at the energy costs required to run the machine, the long cycle time anywhere between 60 to 90 minutes, and also the energy consumption for drying the parts – it all has a negative impact rather than a positive one. We have done lots of trials with aqueous cleaning, and we simply couldn’t get through because the process was just far too complicated for our specific application.”

Now that DOWCLENE™* 1601 has stood the test of time, HS Marston is ready to spread the word too. “Having had the positive experience first-hand, we’ll be looking to drive our subcontract facilities to adopt the same effective cleaning regime as we do as well,” concluded Lees.

How to choose the right parts cleaning agent? Key questions to consider