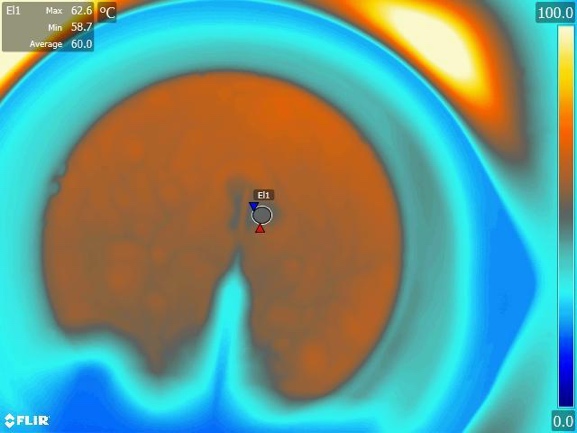 A leading US university has been using a FLIR A655sc thermal imaging camera to study the effect of temperature on tissue autofluorescence. Tissue autofluorescence spectroscopy is a technique that measures the intrinsic light emissions from biological agents upon excitation by a light source. The technique has been proven to differentiate between normal and diseased tissue and thus shows great promise for surgical procedures.  Many past studies have often assumed a constant temperature during measurements where in vivo experiments were assumed to be at body temperature and in vitro experiments were assumed to be at room temperature. However, there are instances in which the temperature may vary greatly such as during ablation surgeries. In these cases, an understanding of temperature effects on tissue autofluorescence is potentially crucial for accurate interpretation of results during these procedures.Using a FLIR A655sc thermal imaging camera the US academic researchers have been able to demonstrate an inverse relationship between temperature and autofluoresence for ex-vivo human tissue.  A member of the US research team commented "Since we were looking to correlate the effects of temperature to our recorded autofluorescence signals, it was very important for us to acquire accurate and reliable temperature values". The researcher added "We chose to use a FLIR A655sc thermal imaging camera because of its affordability as a qualitative temperature imaging tool. In addition, we were able to equip the camera with a variety of magnification lenses to better view our small tissue samples." The researchers involved in the project say that these experiments were their first time using a FLIR thermal imaging camera. They said they were surprised how easy this camera was to use. "You just plug it in, connect it with the software, and you're ready to go."The FLIR A655sc is a high-resolution thermal imaging camera with an uncooled detector that is specifically aimed at scientists and researchers. The camera has Gigabit Ethernet and USB outputs, a wide variety of lens options, and different mounting options, which makes it easy to use in combination with microscopes.