We asked readers of The Engineer for their thoughts on Formula One’s pledge to reduce its net carbon dioxide emissions to zero by 2030. 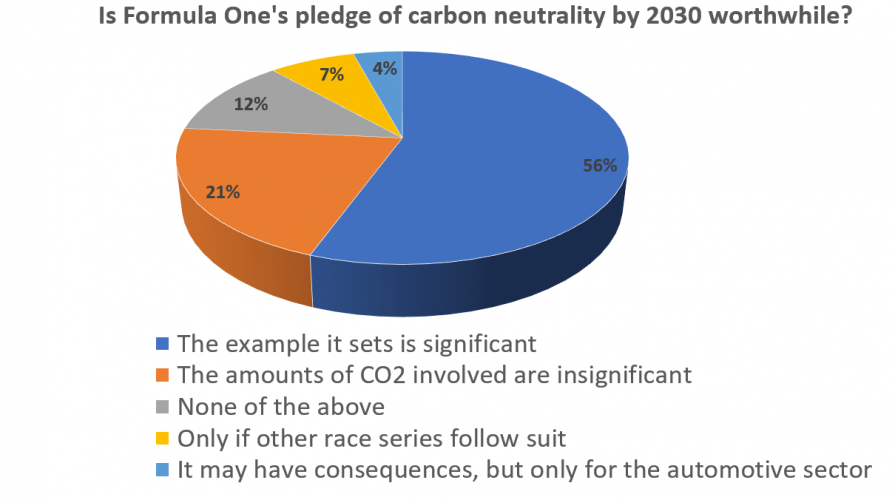 Formula One has committed to making the entire sport carbon neutral by 2030 through increasing the efficiency of its racing engines and making further improvements to the energy efficiency of its factories and offices. It will also offset the carbon dioxide emissions generated by moving cars and equipment around the world to races by planting trees, working on technology to capture carbon dioxide from the air, producing better synthetic fuels from captured carbon dioxide and agricultural waste. But is the move a cynical attempt at greenwash or a genuine attempt to lead the way and set an example for its petrol head supporters around the world?

More than half of respondents (56%) felt the move set a significant example, indicating a largely positive response from The Engineer’s readership. Only one in five (21%) took the more critical view that, given the bigger picture of global emissions, the amounts of CO2 emitted by F1 are insignificant. Just seven per cent felt the move would only be worthwhile if other motorsport series followed suit, while four per cent believed that any benefits would be limited to the automotive sector. More than one in ten readers (12%) chose the ‘none of the above’ option.

“It would be better in my view to reduce the number races and different venues (by half) – F1 has been profligate ever since Bernie Ecclestone reinvented the sport in the ‘70’s,” wrote Bruce Renfrew. “Two-thirds of the emissions are due to the logistics and personnel travel (45 per cent was contributed by logistics, including road, air and sea freight; 27.7 per cent came from personnel travel)…These days there are fewer benefits to the commercial auto industry derived from motorsport in general, but F1 in particular.”

“A bit of greenwash, methinks!” said Another Steve. “However, if it spurs the petrol heads into thinking a bit more about the environment then it could have positive consequences. I would like to see the motor industry, in general, spending a lot more time and money on engine efficiency rather than speed and power – give me an engine that can do more than 100 miles per gallon !!”

The debate will remain open in the comments below, but we remind all readers to familiarise themselves with our guidelines for the content of comments before submitting, and to note that all comments are moderated for length, grammar and sense before publication.