A once dormant milling machine is back in action producing parts for luxury British-made timepieces after a University of Sheffield Advanced Manufacturing Research Centre (AMRC) engineer re-commissioned the machine tool and trained staff how to use it.

Watchmaker Loomes & Co has a three-axis CNC machine that had been gathering dust in a corner of its Stamford workshop, partly due to a lack of machining knowledge in the workforce. It was put on pause after a previous operator left the company, leaving only one person capable of running the machine – owner Robert Loomes.

With little spare time to commit to operating the machine, Robert turned to the University of Sheffield AMRC for help bringing the equipment back into service and upskilling a new member of staff with the basics in computer-aided design (CAD) and computer-aided manufacturing (CAM) to allow in-house production of prototypes and parts for the company’s entirely British-made watches.

Emma Parkin, a project engineer at the AMRC Machining Group, stepped in to help. She made several visits to Loomes & Co, undertaking a number of problem-solving exercises to address issues with existing equipment such as on-machine microscopes, CAD/CAM software and machine set up. She also carried out programming and discussed best practices regarding fixturing, tool selection, cutting strategies and general machine health.

Emma said: “Loomes & Co is a British watchmaker that produces an entirely ‘made in the UK’ range of watches – every component in the watch is British-made – and the majority of the watch movement is made in-house at Loomes & Co on a three-axis machine tool.

“This machine had been out of commission for nearly two years due to lack of machine knowledge within the workforce. We were asked to re-commission the machine, service it and train the new staff with the basics of how to use the machine tool so they could produce further watch components.”

Emma’s work has led to an improved machining process; knowledge of basic machining practices; skills development including design software; redesigned fixtures; and sample part production. Loomes said that what was delivered in a few days by Emma and the AMRC would have taken his company ‘years of practice and experimentation’ to achieve, and has helped boost productivity and spur innovation.

“This level of improved precision and cleanliness means we can work faster and crisper,” he said. “It means we can get from an idea to a finished product much quicker than we ever could before, and that we can afford to take more risks and have the freedom to be more agile and develop more quickly.

The company is based in a former gaol house that dates back to 1588 and is spread over four floors. Its workshops are a showcase of horological expertise, and its watchmaking ancestry can be traced back to Thomas Loomes who, in the 1650s, ran London’s largest firm of clock and watchmakers. The firm only began making watches in 2008 but has enjoyed global acclaim in that time, gracing the pages of publications like GQ magazine and the New York Times.

“It is a fascinating place to visit,” said Emma,  “it is like stepping into another world. The Loomes Original watch is an entirely in-house made movement, every component has been designed and made by them. As an engineer I specialise in micro-machining so it was amazing to be able to go to the workshop and see for myself a watch movement that has been entirely developed, manufactured and built in Britain.”

FROM THE ARCHIVE: THE WESTMINSTER CLOCK

“She also helped us to understand how we could make things better; to do things as well as we could and as quickly as we could. She cut down some of our machining times massively – there were some components that were taking us about three hours to make and Emma helped us to work out how to use the optimum speeds and feeds for the materials we were working with to get sharp, crisp results much quicker. For some of the operations we have almost halved the time it takes to do them.

The project was paid for using funds from the High Value Manufacturing (HVM) Catapult as part of its commitment to supporting the UK’s smaller and medium-sized enterprises.

Growing up in a family business steeped in horology, Robert Loomes was surrounded by clocks and watches and by tales of namesake Thomas Loomes, the eminent 17th century horologist who ran London’s largest firm of clock and watchmakers. 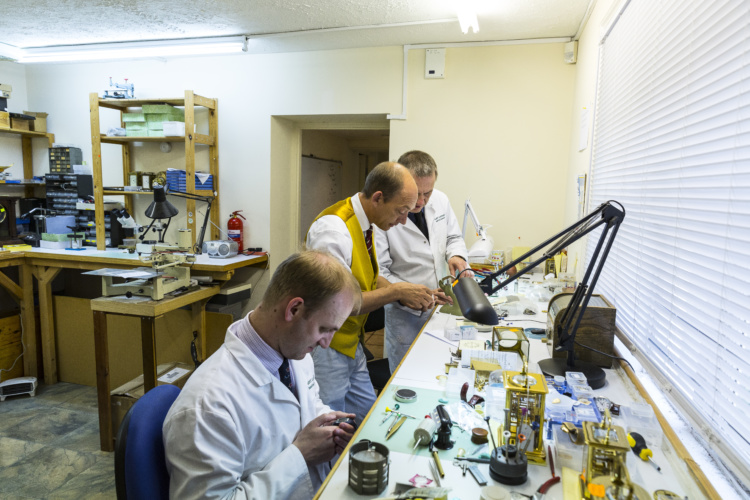 With a background predominantly in repair and restoration, Robert, who served a traditional apprenticeship under his father Brian Loomes before taking up the reins to follow in his father’s footsteps, was convinced it was possible to design, sketch and manufacture every component required to create an English watch.

Despite being told it was an impossible task, Robert set about creating a workshop and a team of watchmakers who could produce a watch from scratch under one roof. Each component is carefully sketched by hand, before starting the meticulous process of turning a sketch into machined components.

“We’re a firm of repairs and restorers. I grew up in the family business doing clockmaking and about 15 years ago I made a couple of watches myself, partly to tease a customer who had brought in a Swiss watch which he had paid £15,000 for. I gently pulled his leg saying I could make something like that for a fraction of the price and that what he had bought was an awful lot of marketing and a little bit of watch. He said ‘don’t be ridiculous you can’t do that’ and I did it to prove a point really.

“I made a pair of watches, one for me and one for him. When he saw them he said we shouldn’t be repairing watches, but that we should be making them. So we started, very tentatively, making watches; we imported bits and pieces – cases, dials, hands – built them all together and we had made a watch. It wasn’t overly difficult.”

The company sold a lot of watches in a short space of time and the business got noticeably bigger. It moved premises, brought in new staff and Robert’s partner Robina Hill took over as managing director, leaving him free to pursue research and development. 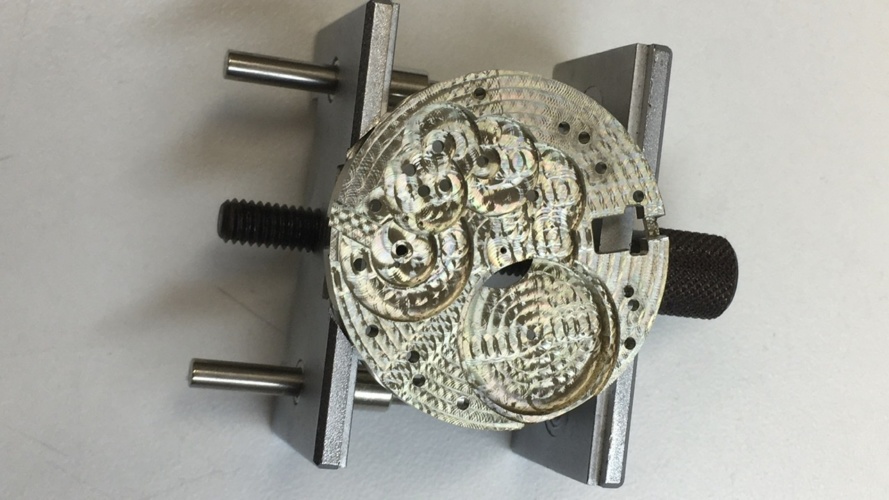 “We produced the first ones really quickly in about two years; that was from the original germ of an idea to very old fashioned drawings on graph paper and making a prototype, to producing the final watch.”

But Robert had a problem: “All of the machinery we had was manual and we needed a decent CNC milling machine to make smaller components ourselves rather than permanently farming out to other workshops around us. It becomes expensive having to outsource almost every component to someone else.”

So the company built its own bespoke kit using a cheap milling machine, stripping it down and rebuilding it to meet their own specifications. It’s by no means of a commercial machine standard that can be run six days a week, 15 hours a day but Robert says for them, the speed of producing components is not as important as accuracy – so running a little slower isn’t an issue.

At less than £90,000 to build and set up, the bespoke machine cost a fraction of the price compared with buying a high-end, commercial machine which would have been in the region of £600,000.

After being used to make prototype parts, the CNC machine was put on pause for a few years but Robert was keen to bring it back into use and approached the University of Sheffield Advanced Manufacturing Research Centre (AMRC) for help re-commissioning the machine and giving staff the skills needed to operate it.