Passenger numbers are rising, and with it a realisation that growth cannot be sustained without reducing greenhouse gas and other emissions. 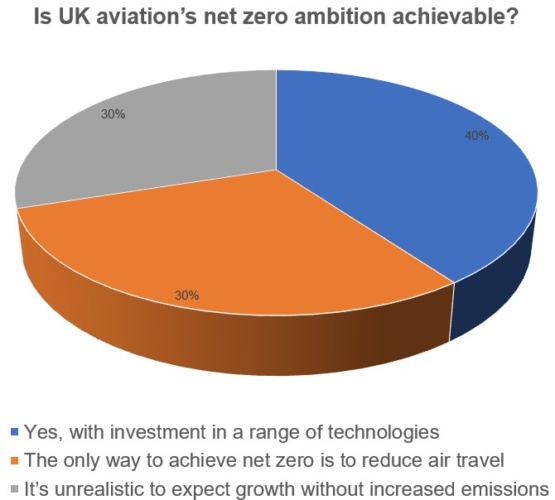 Aviation contributes around six per cent of UK emissions and this is expected to rise to 25 per cent by 2050, according to the Aviation Environment Federation (AEF).

The same organisation says aviation is responsible for 2-2.5 per cent of global man-made CO2 emissions, and is expected to grow to between 4 and 15 per cent by 2050.

In the world’s airports, the International Air Transport Association recorded a 4.2 per cent rise in global passenger traffic in 2019, and overall numbers are expected to grow by 70 per cent by 2050.

According to industry group Sustainable Aviation, the aviation sector is well equipped to handle the rise passenger growth whilst lessening its environmental impact, and believes net carbon emissions from aviation can be cut to net zero in line with government targets.

The ways in which industry will do this are numerous and not always far from controversy with advocates of biofuels countered by those querying land use and sustainability. As well as alternative jet engine fuel, the aviation sector is actively addressing its emissions issues with the development of new hybrid electric propulsion systems, the increased use of lightweight composite materials, alternative airframe designs, and more efficient ground handling technologies.

Despite its best efforts, AEF say ‘there are few commercially scalable options for ‘decarbonising’ aircraft in the near future’, leading to ask if UK aviation will be able to fulfil its net zero ambitions in the timeframe it set out.

For 40 per cent of respondents, the aviation industry will prevail with investment in a range of technologies. The remaining 60 per cent was split equally with 30 per cent agreeing that the only way to achieve net zero is via reduced air travel, and those who think its unrealistic to expect growth without an increase in emissions.

From the comments that followed, The BAE Biker said: “Seems to me that the only way to reduce CO2 emissions is to completely replace all combustion and electric engines with those that use an alternative non carbon fuel source. Until this happens then all forms of transport will continue to generate CO2 either at the point of use or remotely. I agree that this needs to happen in a steady, controlled and reasonable manner.”

“Aviation certainly needs to cut back on emissions and this could be achieved by further improvements in engine design and operation, better aerodynamics and weight reduction,” said Phil Mortimer. “Extensive taxiing at airports could be reduced using tugs but this could also cause complications and would need clever scheduling and asset planning.”

Jack Broughton added: “If we really want the world to reduce CO2, it is to China and India that we must look. This expensive posturing will achieve so little as to be meaningless in the world picture, except to knock another nail in the coffin of UK competitiveness.”

What do you think? Let us know your views on this issue below the line. All comments are moderated (guidelines here).