Sports Utility Vehicles (SUVs) are gaining in popularity, but at what cost to the environment? 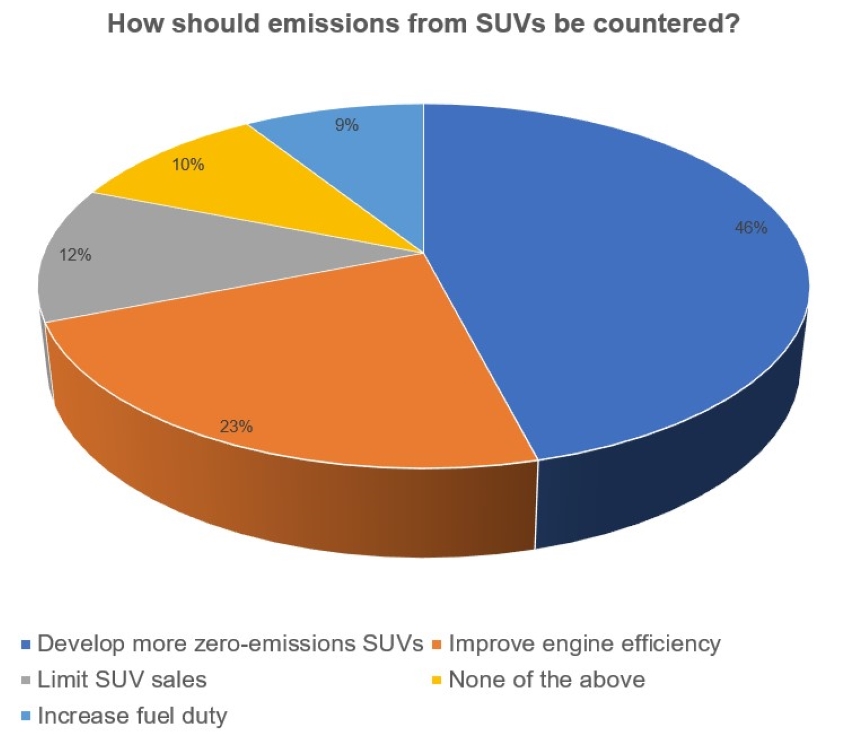 Figures from 2018 show that SUVs accounted for just over a fifth (21.2 per cent) of new car sales, an increase of 7.7 per compared to 2015. Their increasing popularity comes at a cost to the environment, with the assertion that they emit 25 per cent more CO2 than a medium-size car.

The UK Energy Research Centre has highlighted the role of increasing popularity of sports utility vehicles (SUVs) in preventing overall carbon dioxide emissions from transport from declining, and suggests that sales should be reduced.

But exactly how could the increase in carbon dioxide emissions linked to the popularity of SUVs be countered?

We put this to Engineer readers and 46 per cent agreed that the solution lies in the development of more zero-emissions SUVs. Just under a quarter (23 per cent) of the 441 respondents thought improved engine efficiency would work, followed by 12 per cent endorsing a limit to SUV sales. Of the remainder, nine per cent opted for an increase in fuel duty, and 10 per cent chose ‘none of the above’.

In the numerous comments that followed, Brian Spence said: “Higher taxation at the point of purchase is absolutely the answer. It’s would have to be very high and not an option to bundle it in with the monthly payments as 90% of people who are buying new privately are using some type of finance product. If this was exclusively applied to 2wd and luxury vanity vehicles rather than utilitarian 4×4 would weed out and protect users with an actual requirement for a large vehicle.”

“I must admit I am not a fan of SUVs,” added Another Steve. “However, there is no valid reason to penalise SUVs just because of an image problem. All vehicle taxation should be based across the board on a number of factors including mpg, emissions and environmental elements.”

Finally, JohnHartley suggested a closer look at the definition of SUVs when he said: “Not all SUVs are the same. You should not say a 1.3 litre, sub 4-metre long, mini SUV is the same as some 6 litre, 5 metre+ mega SUV. A very clean Euro 6+, mini SUV may well be greener, cradle to grave, than some electric, mega SUV, with all sorts of battery issues from production to disposal.”

What do you think? Add your voice to the debate below, but remember to familiarise yourself our guidelines for the content of comments before submitting.