Following Bloodhound LSR’s successful testing in the Kalahari Desert, The Engineer asked what the most important benefits of the project are likely to be. 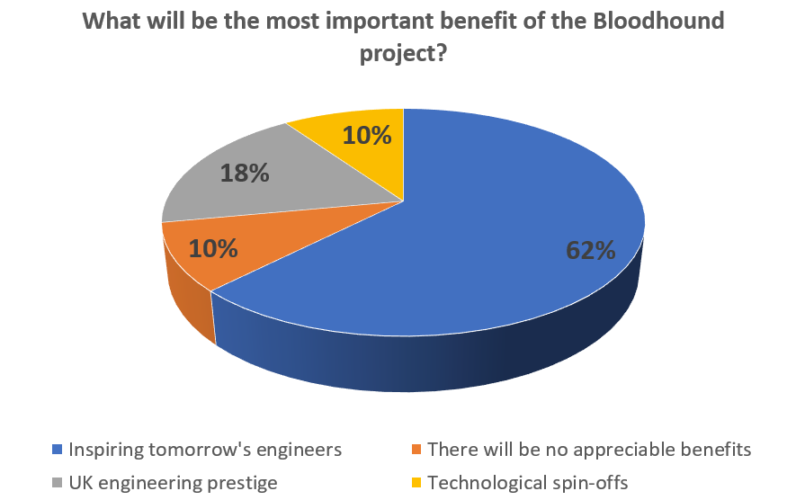 Running solely on its Rolls-Royce EJ200 jet engine, Bloodhound steadily built up its speed during a series of tests on South Africa’s Hakskeen Pan, topping out at over 1,000 km/h on its final run.

When it returns to the desert in the next 12-18 months, the addition of a hybrid rocket engine will provide another 40kN of thrust, and will hopefully see the vehicle claim the world land speed record and perhaps even push toward the 1,000 mph barrier.

It’s a remarkable turnaround for a project that was on the ropes less than a year ago, and huge credit should go to new owner Ian Warhurst for not only rescuing the endeavour but for making such rapid progress in a relatively short space of time.

But what of the long term benefits of Bloodhound LSR? The STEM and educational impact of the programme has often been lauded, and our readers were largely in agreement that this will be Bloodhound’s most prominent legacy. Almost two-thirds (62 per cent) said that inspiring tomorrow’s engineers will be the most important benefit. A boost for UK engineering’s standing was the next most popular answer, with 18 per cent of the vote. The remaining 20 per cent of respondents were equally split between those who felt the technological spin-offs would be the greatest benefit, and those who think there will be no appreciable benefits at all.

“I can very much confirm that the Bloodhound project is inspiring many young engineering students at all levels,” said Richard Masters. “I’m a lecturer in an FE college and initially, I was surprised that many of my students did not really engage with the team, but every day I showed them the video reports of each day of testing and created a YouTube user name for them to comment and real interest grew quickly.

“For the last few days of testing I found that many of my students had already seen the latest video and were keen to tell everyone how it was going. Things like this can inspire a lifetime of interest and learning.”

“Bloodhound visited my daughter’s school which made an impression on all,” wrote Mark Lyman.
“She was lucky enough to win a trip to the project HQ and was inspired by what she saw.
The outreach programme is fantastic.”

Other readers, however, were less impressed, and felt the effort could be better spent on other endeavours.

“I would like to sit down with the whole team and its financial backers and suggest to them all that undoubted talents and practical skills would be better targetted and finding solution to problem embedded in the climate change issues,” said John Swallow.

“Their own children and grandchildren are who they should be working for, not a go-faster on four wheels adding further toxins to the atmosphere. Bin the lot and work on capturing sunlight instead. When will man ever learn.”

As always, we encourage debate on the subject in our comment section but ask that all readers familiarise themselves with our guidelines before submitting. All comments are moderated, particularly for length and grammar and to ensure that debate does not become sidetracked.

Opinion: Industry 5.0 and the dawn of a new digital age