The communication and sensing satellites upon which many of our earthly activities depend typically operate at altitudes of between 500 and 1200km. But what if these critical components of our modern world were able to function at much lower orbits?

DISCOVERER - a Horizon 2020 funded project led by Manchester and involving eight industrial and academic partners - is driving the development of a range of technologies that could enable satellites to do just that, allowing them to operate at altitudes below 450km, in Very Low Earth Orbits (VLEO).

According to project leader, Manchester University’s Dr Peter Roberts, such a capability could bring a range of benefits including reduced latency for communications satellites; improved imaging resolution for remote sensing systems and an ability to use much smaller payloads, thus reducing launch costs. Use of lower orbits could, also make it easier to recover satellites at the end of their operating lives, he added, ensuring they don’t add to the growing problem of space debris.

Designing satellites to operate at these lower orbits and overcome the effects of interactions with the residual atmosphere presents some significant challenges, however.

Firstly, the atmospheric flows in VLEO are significantly different from traditional aerodynamics due to the flow regime and gas composition. The atmosphere is so rarefied that intermolecular collisions are infrequent, and the aerodynamics are dominated by particle interactions directly with surfaces. “Molecules travel kilometers before they hit another gas molecule which means all of the aerodynamics is driven by individual gas molecules interacting with the satellite surface directly,” explained Roberts.  “It then becomes an issue of surface chemistry and physics, with those molecules hitting the surface, how they translate momentum into it and how they’re scattered off.”

What’s more, in VLEO the atmosphere is also predominantly highly reactive atomic oxygen, at orbital velocity, that adsorbs to and erodes traditionally used space materials.  “Each atom has a lot of energy and really wants to react with the surface of your satellite, so there are lots of issues around chemistry,” added Roberts.

Although the challenges are significant, the multidisciplinary team – which brings together physicists, chemists, materials scientists, and assorted experts in space flight and satellite design – has already made a number of key breakthroughs.

A large portion of the work has focussed on the development of aerodynamic materials that are resistant to erosion by the atomic oxygen rich environment in VLEO and that encourage specular reflections of the incident gas. Such materials, combined with appropriate satellite geometries, can significantly reduce drag whilst also generating usable aerodynamic lift to enable aerodynamic attitude control. Developments here have focussed on 2D, beyond graphene materials for which Manchester University has a patent pending.

To characterise and analyse the performance of these materials, the group has built the Rarefied Orbital Aerodynamics Research facility (ROAR) a special ground-based facility at Manchester University that recreates the flow environment in VLEO by producing a beam of atomic oxygen at orbital velocities within an ultrahigh vacuum chamber.  The properties of the gas scattered by a material sample are then measured using a bespoke mass spectrometer.

The team has also developed, built, launched, and is now operating a satellite, the Satellite for Orbital Aerodynamics Research (SOAR) that was deployed from the International Space Station in June 2021.

This satellite has deployed fins coated with different materials, which can be turned to expose a single sample material to the flow whilst observing the induced aerodynamic forces. Roberts explained that the satellite is passing through a range of altitudes as it decays through the VLEO range, and is being used to understand drag and gas surface interaction at a variety of different altitudes and to provide verification of the material aerodynamic performance in the true VLEO environment.

For possible use on future satellites, the team has also built a prototype atmosphere breathing electric propulsion (ABEP) system. This combines an atmospheric intake and electric thruster, which uses the residual atmosphere as a propellant. Such an approach avoids the need to carry propellant on board and in the ideal case removes the lifetime limits due to finite propellant storage.

Finally, the group has been looking at innovative approaches to aerodynamic control to overcome the increased attitude disturbances due to the varying atmosphere in VLEO:  Varying solar activity and day-night cycles produce density changes and induce thermospheric winds of up to 500m/s over the poles. “The atmosphere is variable,” said Roberts. “If you get some good solar activity that affects the density by orders of magnitude – in extreme cases three orders of magnitude which is about the difference between air and water.” 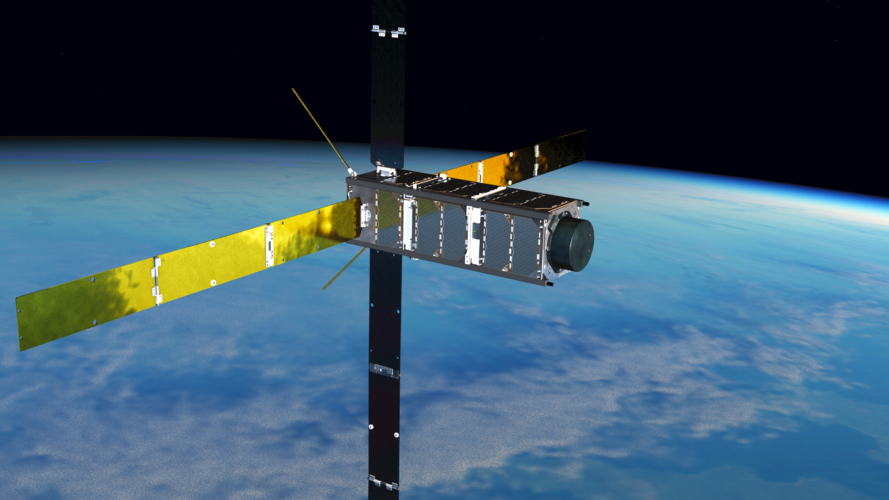 These effects, combined with atmospheric co-rotation with the Earth, mean the atmospheric flow direction rarely aligns with the satellite velocity vector, which in produces attitude disturbances to aerostable satellite geometries.

To address this, the team has been exploring the use of active aerodynamic surfaces combined with traditional actuators, and has also developed new algorithms for aerodynamic attitude control which have been implemented on the SOAR satellite.

The DISCOVERER team has already overcome many of the key technical obstacles to sustained operation of satellites in VLEO. Roberts claims that the development and commercialisation of technologies that enable satellites to operate in VLEO could be key to helping the UK deliver on its stated ambition to capture 10 per cent of the £400bn global space market by 2030.