It may be a long way from Maranello, but an industrial estate on the edge of the Mendip Hills is home to a technology that has played its own small part in the Ferrari F1 team’s spectacular return to form this year. Pitched as the world’s most advanced driving simulators, the machines built by UK-based Dynisma claim to offer a step change in realism. Chris Pickering reports.

Honed on the race track Dynisma's technology is said to provide accurate cueing up to 100 Hz, with up to 400 Hz said to be possible at lower precision - Dynisma

When Ferrari’s team principal Mattia Binotto spoke during pre-season testing this year, he emphasised the importance of correlation between the digital models used in the simulator, wind tunnel data and the real car’s behaviour on-track.

Increasingly, the world’s top automotive OEMs are searching for a similar link between the digital world and the behaviour of their road cars. From ride quality to powertrain noise, they’re using simulators to evaluate every aspect of the driving experience. At the last count, BMW had 14 simulators in its Munich facility alone – each optimised to cover different areas of development.
Although the automotive industry has become an enthusiastic adopter of simulators in recent years, it was motorsport (and, in particular, Formula 1) that was the first market to really embrace this technology for ground vehicle development.

Dynisma CEO Ash Warne was very much part of that movement. As the team leader for McLaren Racing’s simulator operations, he worked with the likes of Lewis Hamilton and Fernando Alonso at the Woking outfit. He then joined Ferrari F1 as a senior vehicle dynamics engineer.

“I remember the first time I saw a driving simulator in action, back in 2007. It was this futuristic robotic system, and my jaw just dropped,” he recalls. “The thing I found fascinating was the complexity of it. You’re trying to trick as many of the human senses as possible into believing that they’re involved in the driving process. In our case, we’re updating that 4,000 times a second with feedback on how the car is moving and what the steering torque is doing, and we also use very high frame rates of up to 240Hz to display what’s going on visually.”

Warne moved back to the UK in 2017 (his decision to set up shop in Somerset partly due to having lived in the area when he was a student at the University of Bath). Dynisma was founded the same year and has since grown to a team of more than 30 people. A number of them are ex-F1 engineers themselves – notably senior simulation and control engineer Nikhil Garrett who was simulator team leader at Ferrari for six years.

“First and foremost, we’ve all used simulators ourselves, so we’ve identified the deficiencies in those and developed our solutions in response,” comments Warne.

In the early days of Dynisma, Warne and his colleagues identified three key issues. The first of these, he explains, is latency: “Our system is able to provide feedback to the driver within three-to-five milliseconds, which is literally an order of magnitude less than some of the competition. If you’ve got 50 or 60 milliseconds of latency – as some simulators do – then you’re adding maybe 50 per cent to the driver’s reaction time. If you’ve got something very twitchy like a Formula 1 car, even a professional racing driver will struggle to react in time with that delay.”

The next challenge is providing the full range of frequency content that would be experienced in the real vehicle, he says: “A lot of simulators cover a range of 15 to 20 Hz. That’s enough to capture the natural body modes of the car itself, but what people overlook is that there’s a lot of high frequency content in there too – it’s attenuated by the suspension, but it’s still there and humans are incredibly sensitive to it.”

He likens it to switching from standard definition to a 4K TV (“once you feel that content and realise it was missing in other simulators, you realise how critical that additional information is to the driving experience”). Many of these movements are too small for observers to even see from outside the simulator, but they add up to extra detail for the driver.

Dynisma’s simulators are said to provide accurate cueing up to 100 Hz (with up to 400 Hz said to be possible at lower precision). That’s well into the human auditory range – providing important cues for noise, vibration and harshness (NVH) studies – but the main benefit is actually ride modelling. As Warne points out, running over an obstacle such as a cat’s eye may only displace the simulator a few millimetres, but it’s the ability to deliver a short, sharp jolt that’s crucial to ride simulations. 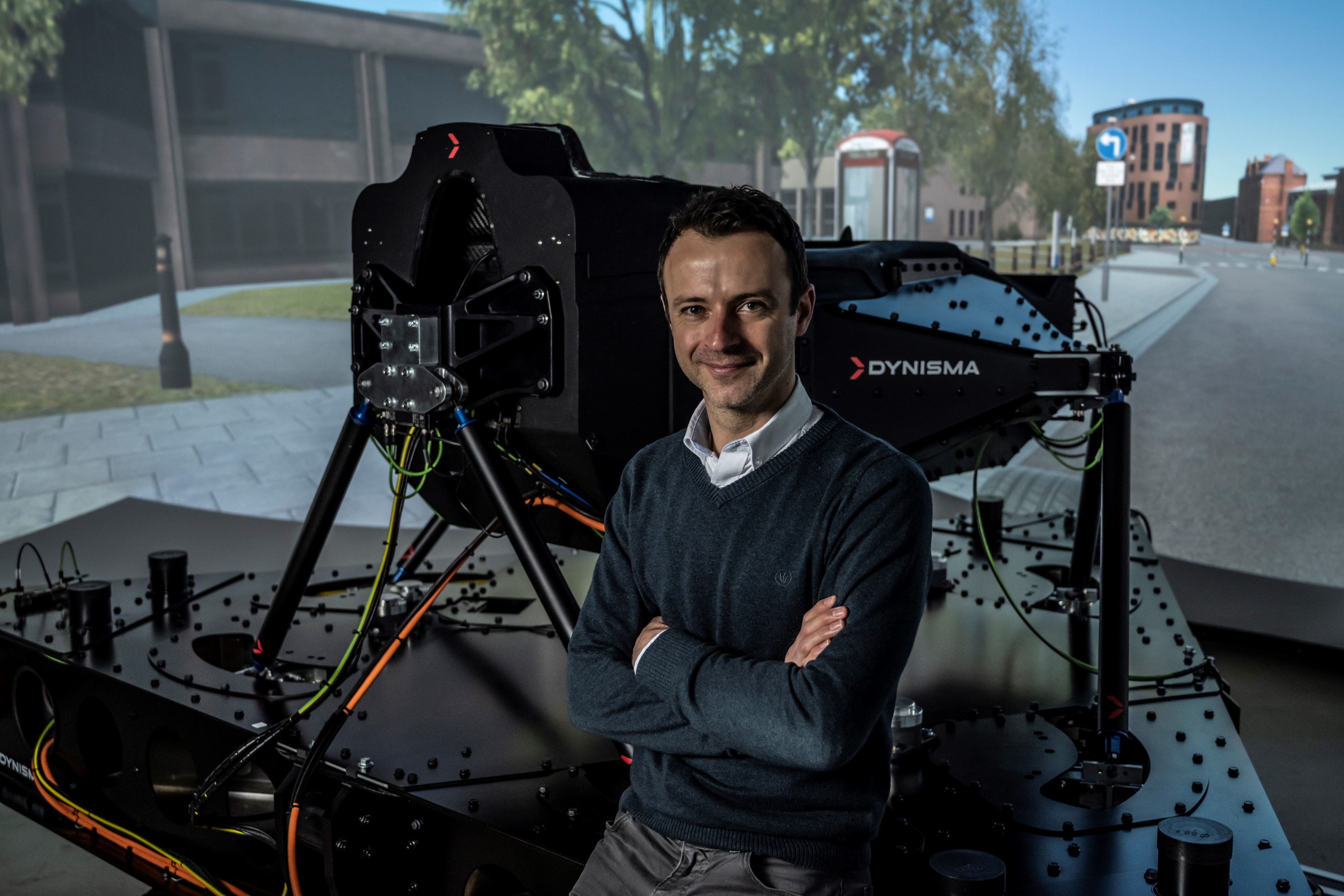 The final point they set out to address is smoothness, he explains: “Cars are inherently smooth devices, but a lot of simulators tend to be constantly correcting their motion, and there’s often a degree of mechanical noise as well. That means there’s this constant background chatter, which can mask small details in the feedback. We’ve worked very carefully on our control strategy and our mechanical design to give a smoother, more organic feel.”

These three core attributes apply equally well to motorsport and mainstream automotive testing. But while motorsport simulators need to provide a well-balanced representation of all the forces and inputs that the car might experience over the course of a lap, automotive customers are often more interested in one particular aspect of the driving experience.
This means the simulator hardware can be optimised to a particular use case, such as providing a very large lateral motion range for lane changes or 360-degree yaw capability for low-speed manoeuvring.

“Our biggest applications on the road car side are ride and NVH, and that’s something that we didn’t really expect initially,” he comments. “Ride and handling engineers are like human accelerometers. They have a language all of their own to describe the behaviours of the car, like rock, stutter, shake and the harshness, each of which correspond to different frequency ranges whose amplitude and phase are important to perceived ride quality.

“Historically, that’s not really been something you could look at in a simulator, because it’s not been possible to simulate upwards of half of that frequency range. But now we can cover the full range that they’re focusing on. It was a bit of a eureka moment when we first had one of these engineers in the simulator.”

This comes at a particularly crucial time for the automotive industry, with an explosion in the number of electric vehicles in development raising new challenges when it comes to ride quality and NVH.

“You’re taking away one large mass where the engine was and replacing it with an even larger mass where the batteries go,” notes Warne. “That means that the vehicles tend to run with very different suspension characteristics, so there’s an entirely new science around re-optimising the ride and the NVH.”

Some road car programmes can involve up to 100 different prototypes, each of which can come with a six or seven-figure price tag. Even at £3 million to £5 million apiece, it doesn’t take long for a simulator to pay for itself if it can displace a couple of these prototypes on each of the manufacturer’s vehicle programmes.

Therein lies the beauty of simulators. The ultimate test remains driving a real car on a real road, but these machines deliver an experience that’s almost imperceptibly close, while providing total repeatability, absolute safety and considerable cost savings. And with each new generation, the range of work that can be carried out in the simulator grows broader still.

In the driving seat

Our visit to Dynisma’s HQ includes a chance to sample the DMG-1 simulator. Pitched predominantly as a motorsport simulator, it sits roughly in the middle of the company’s range, in terms of latency and motion bandwidth.

We start with a model of a high-performance road car on the Spa grand prix circuit. The DMG-1’s carbon fibre tub is alive with vibration as we accelerate off the line.

As with all simulators, the finite range of the motion platform prevents it from replicating high levels of straight-line acceleration for a prolonged period – that’s simply the laws of physics. But the DMG-1 deals with this better than most, providing enough sense of sustained acceleration to prevent disorientation down the straights.

When you reach a corner, however, it’s like someone has flicked a switch. Suddenly, the immersion becomes absolute. Go in too quickly and you can feel the nose washing wide; ride the kerbs and their texture fizzes back through both the steering and the suspension; get on the gas too early and the tail will flick out with a spike of oversteer.

After an enjoyable few laps of Spa, we switch to a virtual proving ground, which has a variety of bumpy road models, ranging from rounded cleats to Belgian pavé.

As with the bumps on the race circuit, the fidelity here is hugely impressive. Instead of simply feeling a jolt, you can clearly discern the shape of the obstacle. Rounded strips, for instance, deliver a very different sensation to square steps. You can pick out the individual disturbance at each axle, as well as the resulting pitch and heave acting on the body as a whole.

The various disturbances are transmitted in different ways too. Small, high frequency chatter is most noticeable through the steering, while the larger bumps come straight up through the seat, giving a real sense of different frequencies passing through different parts of the structure.

The IT crowd: CFD at Marussia F1