British electrical engineer, administrator and journal editor, Caroline Haslett was a staunch advocate for harnessing electricity to free women from the drudgery of household labour. Written by Nick Smith 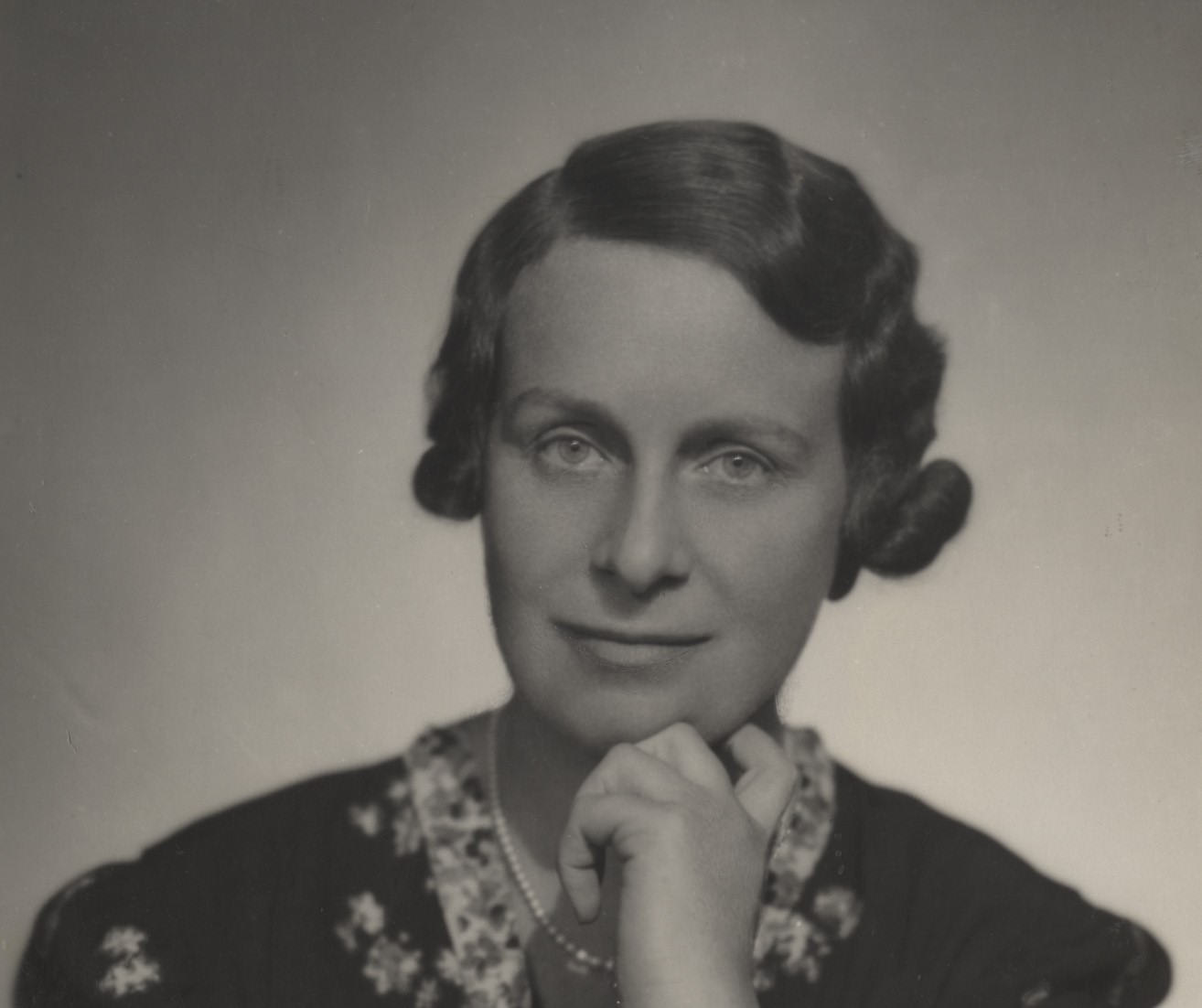 Portrait of Caroline Haslett when she became director of EAW, circa 1925 - Author unknown / public domain -

There probably aren’t many images of women engineers in London’s National Portrait Gallery, but somewhere in the archive there’s a bromide print of Dame Caroline Harriet Haslett. Produced by Elliott & Fry, the undated portrait shows a young woman in three-quarter profile, seated at a desk looking down at some papers. The caption informs us that “Haslett first worked as a secretary in an electrical firm in 1911, reaching management level during the First World War. After the war she qualified as an electrical engineer, and in 1919 became the first Secretary of the Women’s Engineering Society, editing Woman Engineer and the Electrical Age.” It goes on to explain that she was founder and director of the Electrical Association for Women (EAW) – “advocating the importance of using electricity to reduce domestic chores” – and would become the first female vice-president of the RSA, the Royal Society for the Encouragement of Arts, Manufactures and Commerce.

Haslett was born in 1895 towards the end of Queen Victoria’s reign. It was a time of electricity and engines, early automobiles and motorcycles, the birth of wireless telegraphy and the boom of photography. Her father Robert was a railway signal fitter and an activist in the co-operative movement that had evolved alongside the increased mechanisation of the Industrial Revolution to safeguard the livelihoods of the working population. Her mother Caroline led a life dominated by the endless toil of domestic work, which was to influence her daughter’s outlook of social responsibility and advancement for women throughout her career. Not much is known of her school days in Haywards Heath other than the observation that she was unremarkable, and her needlework mistress once chastised her with the words: “Caroline! You’ll never be any good if you can’t make a buttonhole!”

After school, she moved to London where she undertook a business secretarial course before working at the Cochran Boiler Company as a clerk during the First World War. Rosalind Messenger writes in her 1967 biography The Doors of Opportunity, A Biography of Dame Caroline Haslett DBE Companion IEE that while in London her sister joined the Suffragette movement. Her obituary in the Times also notes that Haslett joined the Women’s Social and Political Movement (WSPU) that was run by Emmeline and Christabel Pankhurst. During the war, staff shortages required her to transfer to the company’s workshops where she acquired basic engineering skills. “As soon as I got into the works, I knew this was my world,” she later recalled. In this new and exciting atmosphere of men and machines, wrote one of Haslett’s biographers, she found her spiritual home. Others claimed this was the moment that opened Haslett’s eyes to the opportunities engineering offered women either as a career or as a method of improving the quality of domestic life.

Following the Armistice, on 23 June 1919 the Women’s Engineering Society (WES) was founded with the twin ambition of resisting the pressure for women to leave engineering to release jobs to men returning from the war, and to promote engineering as a professional pathway for women as well as men. At the age of 24 (and still six years too young to vote) Haslett left Cochran’s to become the society’s first secretary, having responded to a recruitment advertisement that was looking for a “lady with some experience in engineering works as organizing secretary for a women’s engineering society.”

In 1925 the WES came to national attention when it organised a special conference at Wembley, in association with the First International Conference of Women in Science, Industry and Commerce. While the main attractions might have been luminaries such as Duchess of York and Lady Astor, the conference also introduced Haslett to the public. At the WES Haslett gained a formidable reputation for being an excellent administrator, skilled in navigating the politics and egos that came with the early days of the organisation.

According to the authors of the IET archives blog The Electrifying Life of Caroline Haslett, “she never forgot that engineering and technology wasn’t just about the practitioners: the new post-war developments in engineering – especially electricity supply – had the potential to change how everyone lived and worked.” These developments centred on the 1919 Electricity Supply Act that would lead to the foundation of the National Grid. While there was a flurry of activity to generate, supply, research and sell electricity in post-war Britain, there was also a lack of focus on the consumer, particularly women in the home. Women “could be sold an electricity supply and shiny new domestic electrical appliances, but they had no voice in the organisations generating and selling electricity.”

In 1924, a new organisation was founded to fill this gap – the Electrical Association for Women – with Haslett as its first director. Its slogan was ‘Emancipation from Drudgery’ and had as its mission the encouragement of the use of electricity to lighten the load of domestic labour. As well as being an education and training organisation, the EAW was also a consumer watchdog, communicating the needs of women in the home to electrical appliance manufacturers. Haslett would also go on to edit the EAW magazine Electrical Age for more than three decades. A 1950 EAW pamphlet entitled Towards Perfection examined how domestic electrical appliances such as kettles and cookers could be improved.

One of the highlights of Haslett’s career was her presence at the 1930 Berlin World Power Conference (a precursor of today’s World Energy Council thought-leadership forum), as the only woman delegate. This was where she met Albert Einstein, and later gave an interview to the Berliner Stadtblatt in which she stated that great scientists did not necessarily make great teachers, and that there was a need for women to explain to women how to use electrical inventions. Her visit led to the founding of a German counterpart of the WES, which was abolished by the Nazi Party soon after it came to power in 1933.

For the next couple of decades Haslett’s career was primarily that of an administrator and leader in the fields of electrical power and the role of women in industry. Just as the First World War had played an influential role in mobilising Haslett’s determination pave the way for women in engineering, the Second World War saw her involvement in the formation of the Woman Power Committee following talks between Haslett and Lady Astor. During the Second World War she was the only woman member (and the only safety expert) on the 20-person committee convened by the IEE to examine the requirements for electrical installations in post-war Britain, part of a larger scheme of Post-War Building Studies. A vital outcome of those recommendations was a new plug and socket standard, the first requirement for which was the safety of young children: “it is of considerable importance that the contacts of the socket-outlet should be protected by shutters or other like means, or by the inherent design of the socket outlet.”

A list of some of Haslett’s noteworthy achievements was compiled by fellow electrical engineer and president of the WES Margaret Partridge in her obituary in the spring 1957 edition of the Woman Engineer: “She was a member of council of the British Institute of Management 1946–54, of the Industrial Welfare Society, of the National Industrial Alliance, of the Administrative Staff College, and of King’s College of Household and Social Science; a governor of the London School of Economics, of Queen Elizabeth College, and of Bedford College for Women; a member of the Central Committee on Women’s Training and Employment; a member of council and vice-president of the Royal Society of Arts 1941–55; and president of the British Federation of Business and Professional Women. She was a member of the Women’s Consultative Committee and the Advisory Council of the Appointments Department, Ministry of Labour; a member of the Correspondence Committee on Women’s Work of the International Labour Office; and the first woman to be made a Companion of the Institution of Electrical Engineers (IEE).”

But, for Partridge the zenith of Haslett’s public service happened in 1947, when she was appointed to the British Electricity Authority (BEA), later the Central Electricity Authority, that had been formed to run the industry under national ownership. In 1949 the BEA named one of the ships in its collier fleet Dame Caroline Haslett in honour of its first woman member, who two years earlier had been made Dame Commander of the British Empire. On retirement Haslett went to live with her sister in Suffolk. She died on 4th January 1957 and was cremated, as per her request, by electricity at the City of London Crematorium.