Handy man: Joel Gibbard founded Open Bionics with the aim of producing advanced prosthetics that are both affordable and desirable 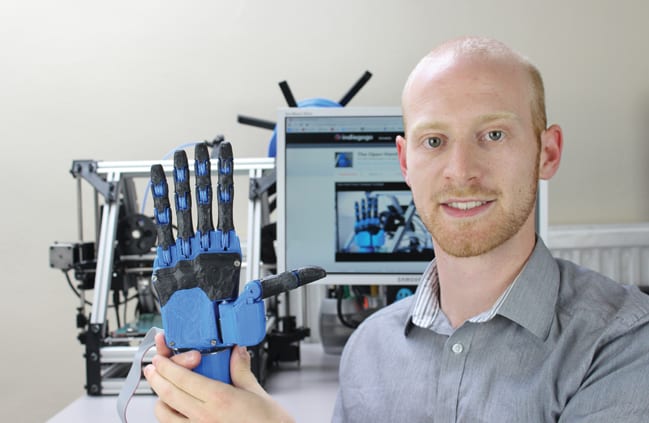 Early experience of robotics led Joel Gibbard to explore ways of making advanced prosthetics available to more people by using the potential of 3D printing and off-the-shelf components. As the founder and chief executive of Open Bionics, Gibbard is now looking at ways of making prosthetics ‘superhuman’, to address difficulties that he thinks other developers neglect in their efforts to make their systems mimic natural limbs more closely.

Gibbard is a recent graduate, completing his degree in robotics at Plymouth University in 2011. “It was a really good course with lots of hands-on experience, covering fundamentals of control engineering, computer science and mechanical engineering,” he said. “We also touched on applications such as education, industrial and prosthetics.”

For his final-year project, Gibbard decided to try to develop a robotic hand. “That was my first prototype,” he said. “It was well received by the department.”

Gibbard’s motivation was the very high cost of advanced prosthetics. “They’re such amazing pieces of engineering, but they cost tens of thousands of pounds, and that’s just not accessible for most amputees, even in rich countries, let alone around the world.”

After leaving university, Gibbard already had his hand project in mind as something he wanted to develop further, but rather than taking it to an existing robotics or prosthetics company, he took a job with National Instruments. “The other companies do awesome work, but they tend to be developing very dextrous hands for the academic or industrial work space, and the demands are different. If you’re not necessarily developing a prosthetic, weight isn’t really an issue and you can put mechanisms outside the hand itself. For prosthetics, it has to be light and everything has to fit into the palm. It isn’t the business model I had in mind and I didn’t think my ideas would get any traction.”

He now thinks this was a mistake and that working in the field he wanted to pursue would have been an advantage. “National Instruments is a great company and I learned a lot with them; I was an applications engineer doing a lot of work in customer support and education, and a lot of the presentation skills I learned came in very useful for pitching. But I’d advise other students in my position to take more time looking for a job connected with the area you want to go into.”

The next step for Open Bionics was a crowdfunding campaign through the website Indiegogo, which raised more than £40,000 for development of the technology. Much of this came from people in the so-called maker community, of which Gibbard is an enthusiast. “Makers are a great community and a lot of innovation is starting to come from there,” he said. “It’s particularly taken off since online communities emerged, and that’s shifted the culture from the old-fashioned ‘men in sheds’. Being able to share information in a way that enables people to build on previous work has made a huge difference.”

Again, explained Gibbard, crowdfunding was a valuable experience but not one he’d repeat. “There is a surprisingly large amount of support available, especially for university spin-outs, with incubators and grants and so on. It’s very easy to get enough funding for the first six months of development and market testing. I think anyone with a half-decent idea should be able to do that. I think I went to crowdfunding too early, before looking at what else was available. But the process is so valuable in terms of talking to people who are interested and learning about your market. I thought I was racing against the clock. I had more time than I thought. University incubators are definitely the best first place to go.”

The Open Bionics hand, called ‘Dextrus’, has been through two design interations. Gibbard has been using an off-the-shelf 3D printer to make the plastic housings – “just because it’s a really good way of making low-volume products”. He added: “It’s not part of our business model, but at the moment it’s the best tool for the job.”

The initial design was a hard plastic shell, with each finger controlled by a DC motor with a spool on the output shaft that would simultaneously ravel and unravel a steel tendon, acting as both the flexor and extensor for the finger. This tendon was attached to a tensioning system to keep it taut at all times.

So each palm had five motors, spools and tensioners, and the 3D printing meant the tolerances weren’t too tight. We eventually made a hand that worked, but

it wasn’t very reliable.” It was also difficult to assemble, taking about 12 hours to put together, and rather large and heavy.

In all, it wasn’t terribly suitable for Gibbard’s maker customers. “About 25 per cent of people making it are makers who just want to make a cool robot hand and then the rest are makers who are also interested in prosthetics and robotic prosthetics, often making it for a specific amputee in mind, or with the intention to fit it to someone,” he said. “There are a lot of these people, and similar projects to ours; if someone has a 3D printer and wants to make a robot hand. When we started we were their only option but now there are four or five to choose from.”

Initially, Open Bionics wanted to give its designs away as open source for people to develop and build on; now it sells its designs as well.

The second-generation Dextrus took greater advantage of the possibilities of materials. “We went back to the drawing board and started using flexible materials,” said Gibbard. “The new design is printed in one piece, rather than individual housing units and finger joints, and all the joints are flexible ‘living joints’.”

The DC rotary motors have been replaced with DC linear actuators, which contain all their own gearing and mechanics, and only operate to close the fingers; the flexible joints spring them back into the open position when the motor is switched off. “We save lots of room, lots of weight and money, and the hand is mechanically compliant in all directions,” he explained. “It makes an intuitive design for human interaction. We can also vary the stiffness at each joint to change the speed the fingers close to grasp nicely.”

Once the team finds the best stiffness combination for the finger joints to grip, this will become a standard construction for the hand, although size and the fitting socket would always be customised.

“To begin with, we’ll only work with people who have a forearm, and are only missing a hand. As we progress, we’ll work our way up the arm, introducing more mechanics for the wrist as necessary.”

Control of the hand uses muscle impulses, picked up on electrically on the surface of the skin using a system with off-the-shelf circuit boards and sensors. For most amputees who have lost only a hand, the remaining forearm muscles can be used; for one recent project for actor Grace Mandeville, who was born without a forearm, Gibbard’s team rigged up a system that used muscles in her back, which Grace adapted to very quickly, Gibbard said. The 3D printing technique allowed Open Bionics to make a custom socket to fit Grace’s arm, which was set with crystals to provide her with a showpiece prosthetic for a red-carpet occasion. This demonstrates one of Gibbard’s goals: to make a prosthetic into a desirable item.

“I want kids to be proud of their prosthetics, and other children should be jealous,” he said. “For example, even very advanced prosthetics have a lot of trouble with computer mouses, so I want to build a laser into the hand and a Bluetooth connection so the hand itself is a mouse. That would make it much easier for amputees to use a computer.

“By the same token, you could put a small speaker in the thumb and a microphone in the little finger and use Bluetooth to connect it to a mobile phone. You generally don’t realise that amputees using a mobile phone only have their prosthetic hand free, and no matter how good it is, it’s not as good as their real hand. The ‘hand phone’ would be an improvement.”