2D Heat has produced a heating element that it claims is up to 50 per cent more energy efficient than the coil wire elements found in white goods.

Warrington, Cheshire-based 2D Heat has produced a heating element that it claims is up to 50 per cent more energy efficient than the traditional coil wire elements found in white goods.

The company's new manufacturing technique is also simpler than the present day energy intensive process used to build such heating elements since it uses a direct hot-spraying method to make the elements.

To build the elements, the company first sprays a resistive track directly onto an insulating substrate that consists of a metal plate with a glass ceramic or enamelled layer applied to it.

Electrical contacts are then applied at two opposing points, so that current flows from one contact area to the second, through the resistive oxide matrix, along the surface of the substrate. Heat is generated by the element due to the resistance of the oxide matrix to the passage of the electrical current.

In a variation on the theme, the company has also developed an element in which current is transmitted through the substrate, rather than across it. As such, in this design, there is no insulating layer between the element and the substrate.

For its innovative design, the company recently won Shell’s prestigious Springboard Award for the UK Central Region and was runner up in the national final, beating off competition from 130 other entrants from around the UK.

And the company has attracted investors too. It has raised a funding package of over £400k which included £150k from the Liverpool Seed Fund and cash from various private investors. 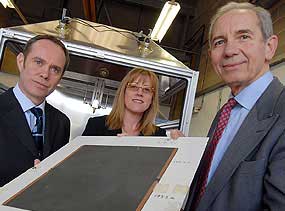 'There are already several blue chip companies interested in using the technology and the investment will help fund the cost of bringing the product to market.  It will also be used to install a pilot line which will enable us to develop the technology for potential customers and modify specific element designs to fit their requirements,' said John Lewis, 2D Heat's managing director.

The company, set up in 2004, has recently relocated its head office to Liverpool from Warrington and employs four staff.