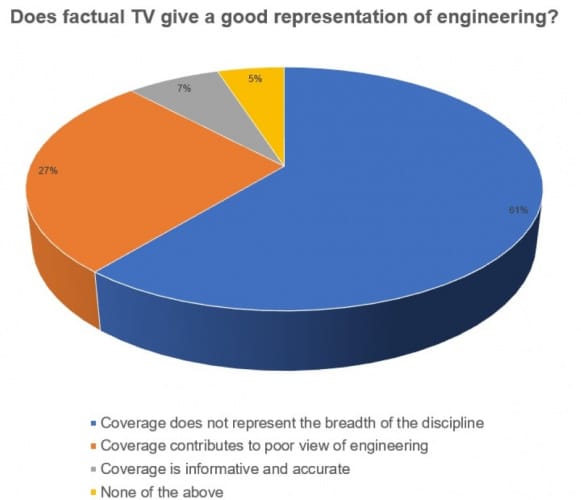 There isn’t a shortage of engineering-related TV shows, but do they represent the breadth of the discipline? Not so for 61 per cent of those who took part in our poll, which asked if factual TV gives a good representation of the engineering profession.

TV shows such as Megastructures, Impossible Engineering, How its Made and Mega Builders have brought certain – often challenging - elements of the profession into people’s homes, but overall, 27 per cent of Engineer readers believe factual TV is contributing to a poor view of engineering. Only seven per cent of respondents agreed that engineering coverage is informative and accurate, with five per cent opting for ‘none of the above’.

In the debate that followed, Pete D said: “I find most of the programmes superficial but then that’s because we are already interested in the subjects and will often have some/a lot of knowledge about them. However, most people have no interest in the depths of these subjects – and why should we expect them to? Yes, I would like more interesting (to me) programmes, but that’s unlikely on the “popular” channels.”

“Most of the stuff I see on the BBC is dumbed-down to the point of being counter-productive,” added Mohammed Abdullah. "It is high-quality production with low-information content. Evidently, the self-important celebrity scientists on the BBC have a very low opinion of viewers. There is also far too much time spent discussing personalities rather than ideas. Historical context is important for understanding how an idea was developed, but the personalities of scientists is not. There is lots of good stuff on Youtube. In particular, for physics, PBS Space Time and Fermilab are excellent.”

Do you relax watching TV shows such as How do they do it? Or does coverage of engineering leave you with a sense of disappointment? The conversation is still alive so let us know your thoughts in Comments below. Readers should familiarise themselves with our guidelines for the content of comments before submitting, and all comments are moderated before publication.