A student at Portsmouth University has designed a wind turbine made from 100 per cent recycled materials.

Max Robson, a student at Portsmouth University, has designed a wind turbine made from 100 per cent recycled materials that could be built by unskilled workers in less than a day.

Robson’s design converts kinetic energy in wind into electrical energy stored in a battery and can be made from a wide variety of scrap.

He designed the turbine to be affordable, sustainable and to help those in the poorest parts of the world. The prototype was built using scrap found on roadsides and in front gardens.

The 22-year-old now wants to take his idea to organisations working in the developing world.

'The wind turbine is 1.8m wide and isn’t too much of a burden on the surrounding environment. The prototype generates 11.3W and charges a battery, which, when fully charged, could run lighting for 63 hours or a radio for about 30 hours,' said Robson. 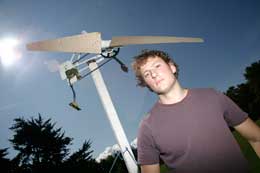