A Michigan State University researcher and his students have developed a nanomaterial that makes plastic stiffer, lighter and stronger.

A Michigan State University researcher and his students have developed nanoparticles that could be used to make plastic stiffer, lighter and stronger.

Lawrence Drzal, a professor of chemical engineering and materials science at the university, led the research group that developed the graphene nanoparticles, which are now being exclusively manufactured by XG Sciences, a university spin-off.

The nanoparticles themselves consist of small stacks of graphene layers that can replace carbon nanotubes, nano-clays, or other carbon compounds in many composite applications.

When added in trace amounts to plastics or resins, the nanoparticles make these materials electrically or thermally conductive, and less permeable, while simultaneously improving mechanical properties such as strength, stiffness or surface toughness.

For example, when the graphene nanoparticles are added to nylon, the resulting nanocomposite is significantly less permeable to petrol or other fuels while also dissipating static electricity.

To make the manoparticles, the researchers developed a new process to separate layers of graphite (graphene) into stacks less than 10nm in thickness but with lateral dimensions anywhere from 500nm to tens of microns. 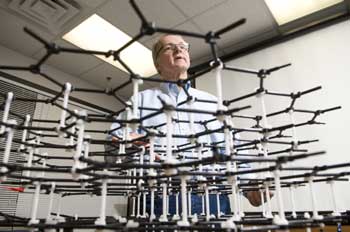 'Now that we know how to make this material and how to modify it so that it can be used in plastics, our attention is being directed to high-end applications where we can really make some substantial changes in the way electronics, fuel cells, batteries and solar cells perform as a result of using this material,' said Prof Drzal.