All You Need To Know About Oxyfuel Cutting Processes

A Complete guide of Oxyfuel Cutting Processes by Omnidex Laser

Oxyfuel cutting is a thermal cutting process that involves the use of fuels, including gasoline, in the presence of oxygen to cut metallic workpieces.

Oxyfuel cutting technology followed the development of oxy-acetylene welding by Charles Picard and Edmond Fouche from France in 1903. The cutting process uses oxygen to raise the flame temperature which is critical for inducing localised melting of the material being cut.

In the early 20th century, prior to the development of arc welding, oxy-acetylene was recognised for its welding and cutting capability for most commercial metals such as cast iron, carbon steel, steel alloys, magnesium, and aluminum alloys. However, in recent decades, oxyfuel cutting has been embraced widely as an industrial cutting technology owing to its efficiency and effective cutting capabilities. Oxyfuel cutting can cut materials of up to 250mm, the cutting equipment is relatively low cost, and the process can be automated for large-scale material cutting. This article explores the fundamental cutting process, the benefits, and fundamental techniques employed in oxyfuel cutting.

During the oxyfuel cutting process, a mixture of the fuel gas and oxygen is focused on the workpiece, preheating the metal to below its melting temperature. A jet containing pure oxygen is then directed to the preheated region of the metal causing an exothermic reaction between the metal and oxygen to form a slag or an oxide of the metal. The oxygen injected into the metal also blows away the slag thereby allowing the jet to penetrate through the metal as it cuts through. Figure 1 shows a schematic diagram of the oxyfuel cutting process 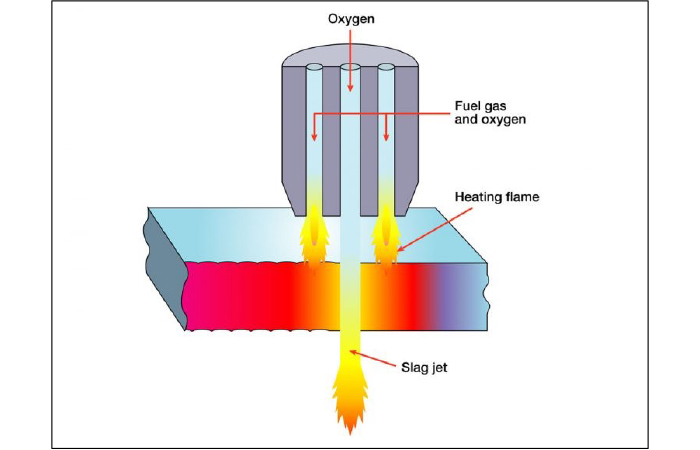 Cutting torch design is similar to that of the common welding torch. Fuel gas and oxygen are continually mixed to produce the preheating flame. A separate pipe is connected to allow the supply of pure oxygen for the cutting process. This pipe is often controlled by a different valve fixed on the torch lever. Figure 2 shows a typical cutting torch.

The cutting nozzles are often designed in form of a central port which can either have numerous small ports or annulus. Acetylene cutting nozzles often employ multiple small circular ports whereas propane cutting nozzles use annular slots. The smaller ports in the acetylene nozzle allow mixing of the oxyfuel and oxygen in the required proportion for preheating while a central port allows the supply of an oxygen jet. The central port is adjusted based on the thickness of material to be cut. Figure 3 illustrates schematic diagrams of the various types of nozzle designs.

Of all the fuel gasses, Acetylene is considered to produce the highest temperature flame, approx. 3600oC. This allows faster and rapid penetration of heat into the material during preheating. The flame speed is about 7.4m/s, a calorific value of about 18890kJ/m3 makes the flame intense at the material surface whilst at the same time reducing heat-affected zones (HAZ) and therefore lowering the degree of material distortion

Propylene is a product of liquid petroleum gas (LPG) with a flame temperature of about 2896oC, relatively higher than that of propane but lower than that of acetylene. However, it has a high calorific value of about 7200kJ/m3. Its major drawback is the requirement for a high stoichiometric oxygen to fuel ratio of about 3.7:1 just like propane

Natural gas exhibits the lowest flame temperature of about 2770oC, lower than that of the other oxyfuels. It has a lower calorific value of about 1490kJ/m3 and hence has the lowest piercing rate.

When cutting thick materials, high gas consumption is expected. This often requires large oxygen cylinders and oxyfuel pipelines to allow adequate gas supply. Therefore to ensure economic and effective cutting it is important to ensure the preheat temperature is sufficient to make the material bright red hot prior to cutting.

For effective cutting of these materials, the surface should be cleaned thoroughly before the cutting process. It is also recommended to incline the nozzle tip to allow undercutting of the scale or paint. Adequate Ventilation should be provided owing to the gases which may be produced. In some cases, respirators may be required to protect operatives during the cutting process.

This form of cutting involves simultaneous cutting of several components of the same size and shape, clamped together to form a single unit. It is recommended to mark the top plate and the cutting profile before proceeding to cut. Figure 5 illustrates a typical stack-cutting process.

Our professionals would be happy to speak with you. 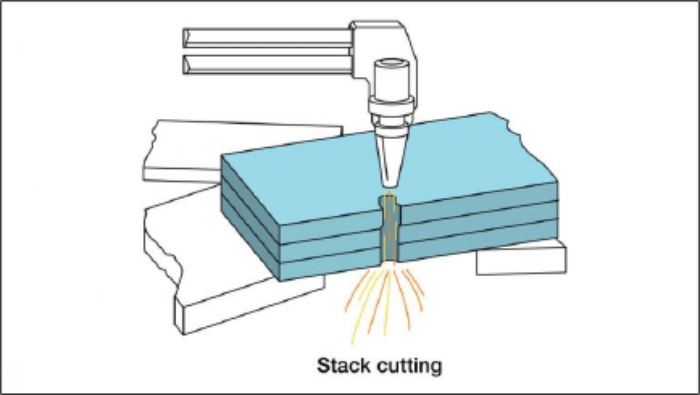 Oxyfuel cutting technology enables rapid material cutting with low costs as well as the ability to cut thick materials. It provides an excellent solution for industrial, construction as well as repair operations. This article has discussed the fundamental cutting process along with various techniques employed in oxyfuel cutting.

Here at Omnidex laser, we operate on an automated oxyfuel cutting machine coupled with ESPRIT Viper 4000 CNC that ensures high dimensional integrity and top-notch metal profiling products. Our dedicated team is highly experienced and provides world-class customer service. We provide diverse solutions in metal cutting to our clients, enabling them to make informed decisions about their projects.

What do we know about oxy-fuel cutting process

Cold laser welding machine: everything you need to know

What you need to know about compressed air desiccant dryers