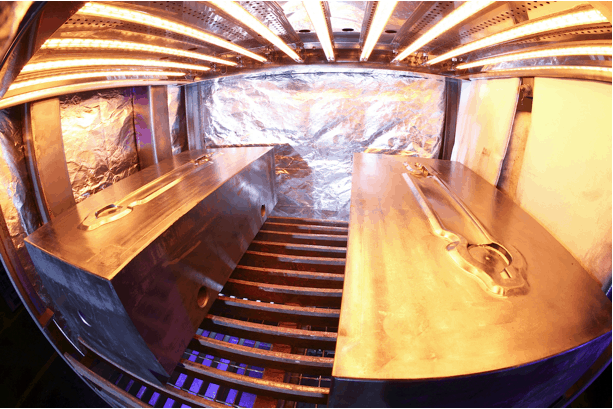 Following the success of an earlier infrared installation, a second short-wave infrared system from Heraeus Noblelight is now allowing Mettis Aerospace to reduce the time required for the heating of smaller tools and dies used in the manufacture of high-specification titanium aircraft components. Specifically, the new system needs only one-seventh of the heating times required by a previous gas system. This has provided significant energy savings and improved controllability, as well as improved forging practices at the company’s Redditch site.

Mettis Aerospace has decades of experience in the production of highly complex forged and machined, safety-critical aircraft components. This extends from manufacturing the majority of Britain’s aero engine pistons during Second World War and pioneering the use of titanium in jet engines to developing alloys for use in Concorde’s structure and skin. Today, Mettis is an important supplier of complex alloy components to companies such as Rolls-Royce, Boeing and Airbus.

The manufacture of titanium components at the company’s Redditch factory involves heating titanium preforms to above 900°C and then transferring the heated material into moulding tools. However, it is essential that the tools are pre-heated to above 200°C to allow better material flow and avoid die wear. Previously, die heating had been carried out by an open-flame gas system, which directed its heat onto support plates. The gas system remained switched on for 24 hours to ensure that the plates were at the correct temperature before the tools were loaded into position. Heating by this method could take up to 10 hours, with limited control of the heat transfer.

When modernisation work was carried out in the Redditch facility, particular attention was paid to the tool-heating system and Heraeus was asked to provide an alternative infrared solution.  The original short wave system installed, which was intended for heating large tools, consisted of two 72kW infrared cassettes, each mounted on an aluminium vertical profile frame. The new system is used for heating smaller tools and features three 50kW short-wave infrared cassettes. Similar to the larger system, the cassettes are located on two frames, positioned on either side of the table used to support the tools, which can be heated in pairs or singly, with heat applied from one side only or from both sides. During heating, a pair of thermocouples measures the temperature of each tool face and this measurement is then used to automatically regulate each cassette’s emitters constantly from 0-100 per cent to maintain the set temperature with optimum energy consumption, maximising the system’s efficiency.

Since installation, the new system has allowed further significant energy savings, as it is only switched on when required, while tool heating times have been reduced, in some cases, from 10 hours to just 90 minutes.

As Dr Xenofon Gogouvitis, R&D lead at Mettis, said: “Implementation of this second IR heating solution further demonstrates our philosophy of operating an eco-friendly factory. The system’s efficiency has allowed us to reduce energy and time consumption during the pre-heating stage of the dies, while improving overall control of the process. In addition, the absence of any open flames means that we now have a safer and more comfortable working environment.”

Electrical sockets and switches are dried with infrared system