A smart approach to mirror control has driven a fundamental breakthrough in the promising area of concentrated solar power. David Fowler reports

A breakthrough in concentrated solar power – and potentially for industrial green energy – was claimed last November from an unexpected source. A hitherto unknown company, Heliogen, announced its arrival with the revelation that it had been able to concentrate solar energy to achieve a temperature of over 1000°C, on a commercial scale, for the first time.

This, the company claimed, meant it could replace fossil fuels in critical industrial processes such as cement, steel or aluminium manufacture, and potentially for thermally splitting water to produce hydrogen.

Space based reflectors could boost solar farms on earth

Concentrated solar power uses mirrors or lenses to focus sunlight from a large area on to a receiver. Heliogen founder and chief executive officer Bill Gross said that by “commercial” Heliogen meant that the temperature was combined with sufficient power – between 250 and 400kW – for industrial purposes. The company is aiming to increase this figure to between 1MW and 10 MW.

Gross said such temperatures had been achieved before, but only at a power of around 5kW, using a parabolic dish to focus the sun’s rays. However, using this method, the focus moves with the sun. Heliogen’s system concentrates the power on a stationery target mounted on a tower. Its breakthrough is based on the use of computer vision and sophisticated software to control an array of mirrors.

“With a dish, when you want to concentrate sunlight, all you have to do is point it at the sun,” Gross said. Tracking the sun can be accomplished easily with a simple light sensor.

By contrast, Heliogen’s installation at Lancaster, California, has 400 mirrors, each measuring 1.5m2. With around 33 per cent ground coverage, they are spread over a total area of 1800m2 .

Gross explained: “In our system we have to align every mirror slightly differently to bisect the angle between the sun and the tower” – because the angle of incidence of light from the sun equals the angle of the reflected ray.

Not only do all the mirrors have to point in a slightly different direction, he adds, “every mirror is not pointing at either the sun or the tower but at a point halfway between – in other words at an invisible point in the sky.”

In previous arrays this has been solved by positioning every mirror on the ground highly accurately using sophisticated surveying techniques, and making each mirror very rigid. They are then pointed in a direction to track the calculated position of the sun at any time.

This can be done with only limited accuracy, says Gross. “Most of the beams don’t point accurately at the target, and this inaccuracy prevents extremely high temperatures being reached.”

With the mirrors several hundred metres from the target, being out by a fraction of a degree can result in an error measured in metres at the target. The result is typically a spot of around 10m diameter and a maximum temperature of 600oC.

This is hot enough to make steam and drive a turbine to generate electricity, but this is not competitive with electricity produced directly from photovoltaic panels.

Gross said: “What we did was find a way to move the mirrors more precisely” – as well as eliminating the need for them to be accurately positioned initially. As a result the light can be focused on an area the size of a basketball hoop – 18in (460mm) diameter.

Heliogen achieves this using computer vision and bespoke software. Cameras on the tower are pointed at the entire mirror array, capturing video at 30 frames per second. Computer vision is used to analyse the position of the edges of the mirrors and the angles of reflection off each, and to make minute adjustments to the position of each 30 times a second. Each mirror receives commands via an ethernet connection and is fitted with two brushless electric motors (for minimum maintenance) to make the continuous small adjustments.

“We aren’t relying on a survey position or on anything predetermined,” said Gross. “We’re just looking at the exiting rays coming off the mirrors to the tower – the exact thing we care about.”

The reason that this has not been done before, Gross said, is partly because sufficient processing power was not available, until NVIDIA GPU processors came down in price sufficiently, making it possible to do the complex computations in real time.

Secondly, major software development in artificial intelligence, image recognition, and computer vision analysis – the company’s core intellectual property – was needed. Though Heliogen only recently broke cover, it was set up in 2013, and Gross reckons the equivalent of 40 to 50 person-years of work went into software development, culminating in November’s demonstration.

Not only were unprecedented temperatures reached, the cost of the system is lower. The mirrors do not have to be stiff, or meticulously positioned, both of which add to costs. “Our system is closed loop, like tracking the mirrors with your eyes open. Other systems are running blind, positioning the mirrors based on a look-up table,” Gross said. Any ground settlement, for example, would be compensated for automatically.

The mirrors are made of ordinary glass with a silvered backing, protected against the elements by a layer of copper and a coating of outdoor paint on the back. The glass is only 3.2mm thick – as thin as possible for maximum reflectance, but thick enough to withstand a hailstorm.

No special materials are needed for the mirrors – because they reflect the light they remain cool. For the collector, refractory ceramic bricks, as used inside kilns, are employed to withstand the high temperatures. The light beam is focused on the ceramics, with whatever the process is being used to heat, such as steam or cement, placed inside.

Gross has three ambitions for application of the technology: first, for customers who want to produce steam for industrial processes; second, for processes such as cement manufacture; and third, to split water to create green hydrogen.

For industrial use, the next stage will be to integrate CSP into manufacturing processes. Cement manufacture, which alone accounts for over 7 per cent of global carbon dioxide emissions, is currently undertaken in rotary kilns. The process would have to be adapted to integrate CSP.

Gross says the initial focus would be on the first stage, calcining, because this is where most of the energy is used. In calcining, limestone (calcium carbonate) is heated to between 900-1000°C to drive off carbon dioxide, leaving calcium oxide. Gross envisages that it would be achieved by carrying limestone to the top of the tower via conveyor belt in batches, for heating in a form of oven.

Alternatively, steam would be heated to 1000°C and brought to ground level in insulated pipes (with only a 10-20°C temperature drop) and either used to heat the materials directly or used in a convective heater to heat an oven.

The important point, Gross stresses, is that Heliogen’s system allows steam to be heated to the required temperature at low cost, and it can then be transferred to wherever the heat is needed.

“The next stage is integrating with actual processes, and that is work we’re going to do with customers,” he said.

Following November’s demonstration, Heliogen has been approached by “over 1,000” prospective customers, though the company is not able to announce any names yet.

“We have some customers who just want steam for an industrial process – we can sell to them right away,” Gross said.

Other prospective clients are offering to work together on the R&D needed to adapt and integrate CSP into their processes. Gross is keen to combine Heliogen’s expertise with that of industry partners on their processes. It is in a position to choose those who are most promising from the point of view of having the best sites for sunlight, or the most suitable processes, and is in negotiations to sign them up.

Most would like to run their processes 24 hours a day, he added, but this can be made possible through thermal storage. Again, this can be achieved cheaply by blowing air or steam heated by the solar collector over refractory bricks, from which the heat can be recovered overnight.

Gross describes green hydrogen as “the holy grail”. This presents an additional challenge because it would need the target to withstand 1500°C. Then the hydrogen would have to be compressed and transported. 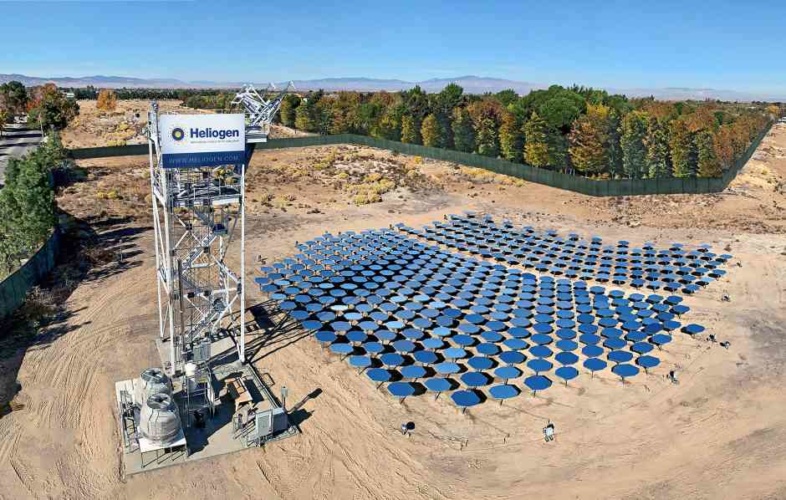 Currently, using solar photovoltaic electricity to electrolyse water is uncompetitive with reformation of methane for producing hydrogen. However, Gross believes CSP will be more efficient then PV because it uses heat from the sun directly rather than converting it to electricity first, and again the process will be capable of continuing overnight.

He sets out an ambitious timescale for practical applications, expecting to see the technology in use with steam customers this year, integration into processes such as cement or steel production next year, and for hydrogen production by 2022.

Installing CSP does not entail a large construction project. Only the tower, around 40m, would need significant construction skills. The mirrors do not need any special foundations and could be installed by unskilled labour. In time they will be powered by solar panels and connected by wi-fi, eliminating cabling.

From the point of view of funding, Heliogen already has a number of well-known investors such as Bill Gates on board. More have come forward since the launch. Gross is confident the company has the backing it needs. “We’re really well financed,” he said, “we can easily take it all the way to the market.”