The UK government is keen to see a rise in productivity, yet the nation falls short when it comes to installations of industrial robots. 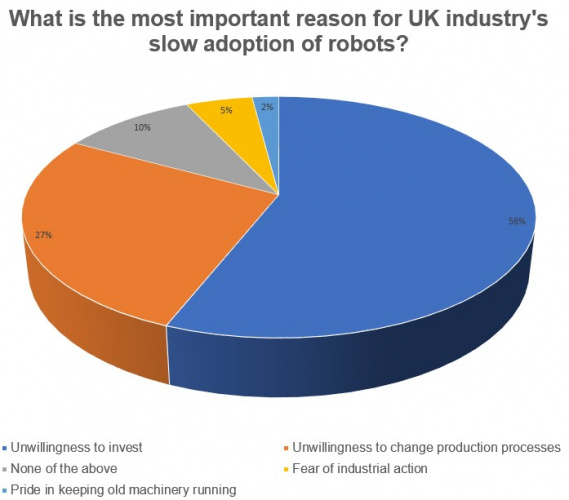 According to the International Federation of Robotics (IFR), Britain’s installed base of industrial robots dropped by three per cent in 2018 following a year of growth that saw sales rise by 31 per cent.

Europe leads the world in relation to the number of robots installed, with 106 industrial robots per 10,000 employees employed in the manufacturing industry, but the UK continues to fall short of its European counterparts.

Digital manufacturing: what, where, how and why?

Why is this? According to Mike Wilson, chairman of the British Automation and Robot Association (BARA), the UK has attracted workers from other countries, removing the need to invest in capital equipment. However, with Brexit looming, businesses will either have to rethink how they use their human resources, or start investing in robot automation.

We asked Engineer readers to provide their thoughts on the slow adoption of robots in UK industry, with 56 per cent agreeing that there’s been an unwillingness to invest in the equipment.

This was followed by 27 per cent who see an unwillingness to change production processes, and five and two per cent opting for 'fear of industrial action' and 'pride in running old machinery' respectively.

The remaining 10 per cent opted for ‘none of the above’, including John Logson who said: “It is persistent low wages, aided by tax credits , that means companies would rather battle on even though this means a lack of expansion capacity. Add to this the pressure to keep share price high by paying high dividend and there is the perfect storm. It is very short sighted and both the corporate and political governance is to blame.”

“I voted ‘unwillingness to invest’”, said Ian Wilson, “not because my company is failing to invest in new machinery, but rather because it is failing to “invest in people”. Robots tend to require a higher level of skills in the workforce – for every operator lost you need an IE to program the robot. Our geographical location doesn’t help: there’s plenty of un/semi-skilled workers available, but few IE’s and poor local training facilities.”

In a similar vein, Richard Jenvey added: “Computer-controlled equipment requires a high level of thinking power to achieve any results, and more still for best results. Without that the equipment just becomes an expensive replacement for conventional machinery with no obvious gain. A further concern is that, in our case, the average age of the skilled programmers is high and rising. Where are the young, thrusting, give-me-a-problem-and-I-will-solve-it engineers? I believe that failure to invest is partly driven by the fear that a company will be unable to find the right people in the future and thus have simply wasted money and space.”

What do you think? Keep the conversation alive in Comments below, but take a look at our guidelines for the content of comments before submitting your thoughts.

Last week’s poll: adoption of digital manufacturing in the UK